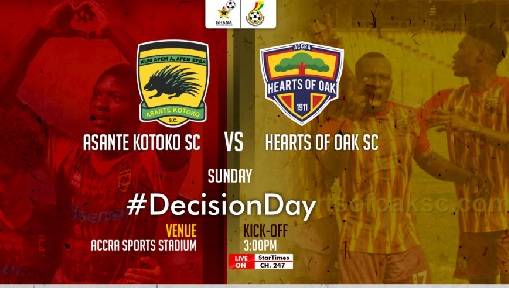 The Ghana Football Association (GFA) has declared that there will be no sales of tickets at the Accra Sports Stadium on Sunday  during the match between arch rivals Accra Hearts of Oak and Kumasi Asante Kotoko.

According to the  GFA, tickets for the match will rather be put on sale at vantage points in the Accra Metropolis and its environs two days before the match, hence the need for football fans to purchase them before converging at the stadium.

“The General public is hereby informed that tickets for the Ghana Premier League Matchweek 31 game between Accra Hearts of Oak SC and Asante Kotoko SC will go on sale on Friday, June 25, 2021 and Saturday, June 26 .

According to the FA, the  face value  of the tickets which range between GHC 30.00 and GHC 100.00 would be sold  at the  Hearts Secretariat at  Asylum Down,  the. Accra Sports Stadium,  Nima Goil, Neoplan Station, Dansoman Goil, 37 Goil and the Kaneshie Goil.

The tickets will be sold at the following rates: While the Popular Stand  will attract  GHc30.00, the Center Line, Osu, goes for GHc50.00, with the Lower VIP  attracting  GHc 70 while the Upper VIP  goes for  GHc100.

The GFA hinted that  there  would be no selling of tickets at the stadium gates on Sunday, and that only persons with tickets  shall be granted access to the stadium by the security personnel to be stationed at all entry points leading to the stadium.

According to the GFA  “A joint Security team made up of Military and Police personnel will be deployed at vantage roads leading to the Accra Sports Stadium, and fans without tickets are advised to stay away from the Accra Sports Stadium and its immediate surroundings on Sunday”
Adding that  “the Super Clash will be played under strict COVID-19 protocols as required by the National COVID-19 Task Force and the GFA Matchday COVID-19 Protocols”