Shafiu Mumuni: Kotoko's my plan B 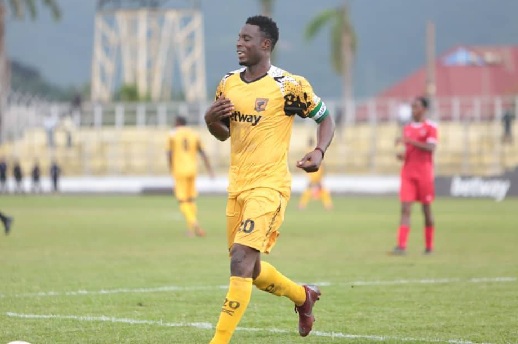 In-demand Ghanaian striker, Shafiu Mumuni, would consider Kumasi Asante Kotoko as a fall back option once his pursuit of a foreign contract falls through, his manager has stated.

The 25-year-old former AshantiGold skipper is being pursued by several local clubs, including Kumasi Asante Kotoko, who have made a formal approach to him as the club seeks to bolster their squad ahead of their continental club campaign.

Yesterday, coach of the club, Maxwell Konadu, told the Graphic Sports that the Porcupine Warriors were still awaiting a response from the player’s camp after Kotoko submitted their offer for Mumuni’s consideration.

He fell short of disclosing details of the offer but sources close to the club said it was a good deal that would ordinarily entice any local player to wear the Porcupine Warriors jersey.

Responding to the coach’s claims, the player’s manager, Samuel Kwaitoo, also told the Graphic Sports that they were focusing beyond the shores of Ghana and were looking at several offers from Europe, Asia and South Africa.

“The boy has foreign offers and that’s what we are considering,” he hinted, saying that they were positive Mumuni would pursue his career abroad having achieved everything he needed to achieve on the local scene.

Mr Kwaitoo added that he’s had verbal discussions with the CEO of Kotoko, Nana Yaw Amponsah, and made it clear to him that in case Mumuni did not travel outside and had to play in Ghana, they would give Kotoko the first option to sign him.

He explained that they had not commenced any detailed discussion with Kotoko because the two parties had not reached that stage yet, but gave an assurance that the player would be heading to Kumasi, if his preference for playing outside Ghana failed.

“We have not discussed the offer at all because we know we have not reached there yet. We’ve received the offer alright but we told Nana Yaw that when it came to that, we’ll sit down and talk about the offer. We are still considering the offers that have come from outside”, Mr Kwaitoo emphasised.

Coach Konadu admitted that they were interested in the player but also had other unnamed targets they were considering in order to strengthen the team for the competitions ahead.