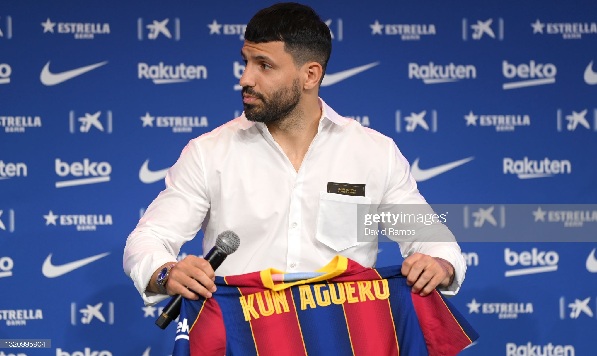 Barcelona and Argentina striker Sergio Aguero announced his retirement from football on Wednesday at the age of 33 after being diagnosed with a heart condition, bringing the curtain down on an 18-year career during which he scored more than 400 goals.

Aguero was taken to hospital on 30 October after experiencing chest pain and breathing difficulties in Barcelona's 1-1 draw with Alaves. The club announced a few days later that he would be out for at least three months following cardiac analysis.

"This press conference is to communicate that I've decided to stop playing football. It's a very hard moment but I'm at peace with the decision I made," a tearful Aguero told a gathering at the Camp Nou.

"It's a decision that I made to preserve my health. It's what the doctors said to me, that it would be better to stop playing. I made the decision around 10 days ago.

"I'm very proud of my career, it was a dream come true. I just wanted to be a professional player and never thought that I would play in Europe."

The Argentine joined Barca on a free transfer during the close season, but made only five appearances in all competitions due to a calf injury and his cardiac issues, scoring once in a 2-1 home defeat by Real Madrid.

Aguero moved to Spain after a decade with Premier League champions Manchester City, where he scored 260 goals in 390 appearances to become the club's record goalscorer.