Mourinho rebrands from 'Special One' to 'Happy One' 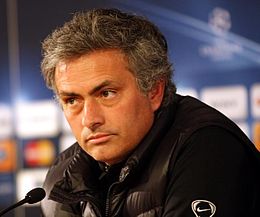 Jose Mourinho returned to Chelsea yesterday and the smiling 'Special One' said he was now the 'Happy One' on his second coming as manager of the Premier League club he has always loved.

With some 250 reporters from home and abroad and dozens of television crews crowding into a suite at Stamford Bridge, there was never any doubt about the Portuguese retaining his media pulling power of old.

"If I have to choose a nickname for this period, I would choose 'the Happy One'," he declared. "I am very happy.

“I am the happy one, I am very happy,” he said when asked if he was still special. “Time flies. A lot of things happened in my professional life in the last nine years, but I have the same nature, I am the same person, I have the same heart, I have the same kind of emotions related to my passion for football and my job, but I am a different person in this moment.”

Speaking in a more subdued tone than at his 2004 arrival, he said, “it’s the first time I arrive in a club where I already love the club.”

The Portuguese coach, 50,  who has a four-year contract, guided Chelsea to two league titles in his first three-year tenure, along with one F.A. Cup and two League Cups. He said he can better that.

“You never know but I want to believe it’s possible. I always trust my work,” he said. “I know many of the people that belong to the club and I know the kind of mentality people have here. My career was built and based on success where I was able to win trophies. I want everyone to work hard, work with quality. The club means much more compared to ourselves. We are no one without the club. If we work well, success will arrive.”

Mourinho left Chelsea in September 2007 after media reports of clashes with billionaire owner Roman Abramovich. He denied today that there’d been a breakdown in relations.

“That’s not true. I read and I keep hearing that I was fired, I was sacked, we had a complete breakdown of our relationship. That was not true,” he said. “Many didn't believe that but it was a mutual agreement. We thought it was best for both of us, for me and the club.”

He said he didn't regret the decision to leave as he had “probably the best moment of my career” at Inter Milan, which he led to the 2010 Champions League title.

“For Chelsea things went well too, after that Chelsea were European champions for the first time,” he said.

He said he’s returned to Chelsea and Abramovich “because we are in the best moments of our careers and ready to work together again. There are much better conditions at this time to succeed and have what we want, stability.”