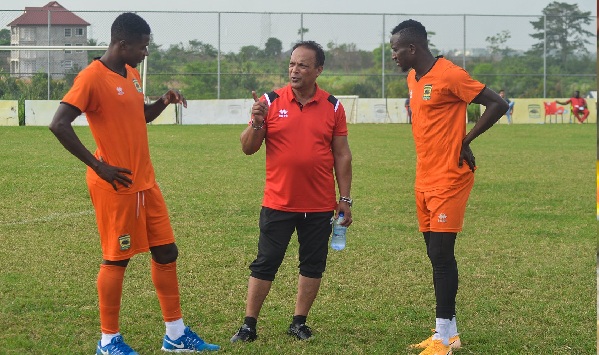 Coach Mariano Barreto (middle), issuing directives to his players during his first training session with the club
30.5k Shares

Portuguese trainer, Mariano Barreto, has started work as head coach of Asante Kotoko after meeting the playing body and taking control of training on Monday at the club's Adako Jachie training grounds in Kumasi.

The former Ghana national team coach arrived in Accra last week to take over the Kotoko job from Abdul Gazale who was in charge for barely one month.

The 64-year-old Bareto joined Kotoko on a one-and-half year deal and will lead the Porcupine Warriors to the Ohene Ameyaw Park this weekend to play against Techiman Eleven Wonders when the second round of the Ghana Premier League returns.

Barreto returns to the country for a second stint after handling the Black Stars from 2004 to 2006 and is expected to lead the Porcupine Warriors charge for the league title.

The Portuguese becomes the 10th coach to take charge of the Porcupine Warriors since the club parted ways with Michael Osei in 2015. He is the seventh expatriate to coach the club since 2007 after Kjetil Zachariassen, Steven Pollack, Zdravko Lugarusic, Bogdan Korak, Maurice Cooreman and Talat Uzum.

Barreto was in the stands to watch Kotoko at the weekend when they beat lower-tier side Rainbow FC in a friendly match.

Kotoko finished in fourth place in the first round of the league with 27 points and will have a tough task of finishing as winners.