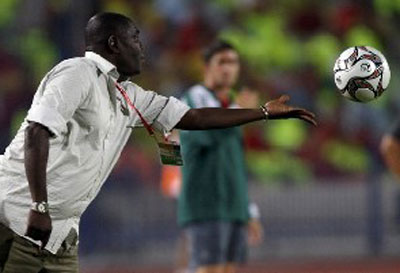 Coach Sellas Tetteh has denounced suggestions that he opted for pretenders when he was confronted with the choice that he did possess the right quality of players to perform at the global stage.

He said it was wrong for anyone to suggest that he sacrificed quality for below average performers in the composition of his team for the ongoing World Cup in Turkey.

After their opening game in which the Black Satellites lost 1-3 to France, the Satellites’ handlers were particularly lampooned for selecting pretenders that lacked the competitive edge to battle at the global stage.

To the numerous critics, the trainer jettisoned a squad bequeathed to him by former coach of the team, Maxwell Konadu, who led the Ghanaians to qualify for the Africa Youth Championship, due to personal interests of some of the team’s handlers.

But speaking to the Daily Graphic yesterday at Kayseri in Turkey, Sellas rejected the accusations, saying they lacked basis and have been contrived by people who were oblivious of the individual potential of the team.

He contended that the players paraded at the tournament were the best the country could offer at the moment,  arguing further that majority of them were in the squad that qualified  for the Africa Youth Championship in Algeria and participated in that competition.

“I don’t think we selected bad players. We tried to make few changes in the team that played in the African tournament  that saw the inclusion of some other talents who have the exposure to play at the big stage.”.

I am not surprised, it is normal to expect such accusations, particularly when you are given  the responsibility to manage a team in the age category,” he stated.

“I have been in this job long enough to know the best players at this level.

“In fact, every coach prepares his team at this stage to win something for his country, but sometimes things turn out badly as we are experiencing  at the World Cup now,” he added.

After losing their group opener to France, Coach Tetteh explained that the decision to consign Italy-based striker Richmond Boakye-Yiadom and defender Abdul Rahaman Baba to the reserves bench until late into the match was not born out of technical naivety on his part, but rather a tactical decision in the supreme interest of the team.

The coach was severely criticised over the prudence in keeping the two players on the bench when they possessed the quality to turn the Satellites’ game around.

Indeed, Sellas must feel betrayed by the performance of the two players in their three group games played so far. Even with the limited time they got to play at the opening game striker Boakye-Yiadom scored the team’s face-saving goal so far scored by the team in the competition as a results of his combination with Rahman.

In the next two games against spain and USA where Ghana romped to a 4-1 victory, the two players — who were among the latest additions to the team after the Africa Youth tournaments only joined the squad from South Africa less than 24 hours before the opening game — brought their experience to bear on the games and would be key to the team’s campaign if the Satellites manage to progress to the second round as one of the four best third-placed sides.