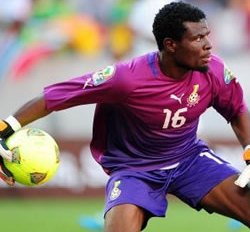 AshantiGold Chief Executive Kudjoe Fianoo is expected to travel to Johannesburg to meet officials of Orlando Pirates tomorrow, to open talks with the club over the signing of goalkeeper Fatau Dauda.

The Bucanners have identified the Ghana number as a replacement for Moeneeb Josephs, who would be leaving at the end this month.

"We have not spoken about a figure yet. The club have expressed huge interest in the goalkeeper and I'm leaving Accra on Tuesday night and should be in SA on Wednesday," Fianoo told MTN Football.com

"You know that the Black Stars are in South Africa preparing for their World Cup qualifier and so we will discuss their terms and see what will happen."

Dauda made a huge mark at the 2013 African Cup of Nations in South Africa, where he put up a world-class performance between the sticks for the Black Stars.