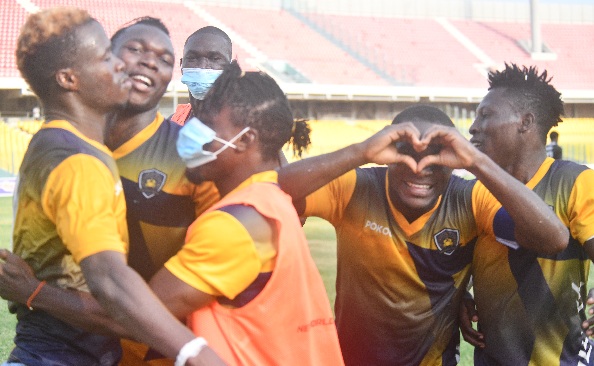 Ebusua Dwarfs celebrating one of their goals

Cape Coast Mysterious Dwarfs last Saturday deepened the woes of bottom club Inter Allies by descending on them at the Accra Sports Stadium and inflicting a 2-0 painful defeat on their host to bag the maximum points at stake.

Benjamin Acquah and Moro Sumaila became the heroes for Dwarfs when they defied all odds to score two brilliant second half goals in a space of six minutes- the 71st and  77th minutes respectively- to prove their worth as superb goal poachers for their club.

After a series of goal scoring opportunities had gone waste for both sides in the first half and a greater part of the second half, Acquah taught his teammates how to turn half chances into goals by pouncing on a lose ball midway in the half of Allies. He dribbled past two markers before releasing a carpet right footed shot that whisked past a couple of Allies defenders and caught Gifron Ahenkorah in post for Allies flat footed by hitting the back of the net before the goalkeeper reacted.

Having messed up a couple of chances before the opener came, almost the entire players of Dwarfs poured on the goal scorer on the pitch for almost 90 seconds in celebration of the goal.

Referee Patrick Okyere had to intervene before Dwarfs released Acquah who had hit the turf to celebrate his goal for the re-start of the game.

Acquah’s goal sparked a new life into Allies who poured into the territory of their guests with the hope of coming at par to earn at least a point from the game which was played in an empty stadium in spite of the 25 per cent quota of supporters who can watch the Premier League.

Allies coach, Dani Mujkanovic, stood akimbo on the touchline, restless and shouting instructions at his players after the opening goal with the hope of galvanising them into action.

Allies responded with one-touch inter positional passes as they invaded the territory of Dwarfs to probe for a goal while Dwarfs relied on long ball counter attacks.

In the 77th minute, Dwarfs cleared a corner kick from their goal area when one of their defenders released a long ball to Sumaila who was hovering midway into the area of Allies.

When goalkeeper Ahenkorah saw the danger ahead, he came out from his post with an attempt to intervene, but Sumaila  who saw the advancing goalkeeper cleverly lobbed the ball over him, catching him stranded while the ball bounced behind him before entering the empty net for Dwarfs’ second goal. The few supporters of Mysterious Dwarfs in the stand started jubilating even before the ball hit the net with precision, a situation that saw many of Allies players shaking their heads in despair while their opponents went on wild celebrations.

With a comfortable lead, and with a few minutes to end the game, Dwarfs resorted to play a more relaxed game by bringing in Prince Kpodo for Simon Martey in the 86th minute.

Earlier in the first half, Allies striker Taufiq Shaibu came close to opening the scoring line in the second minute when his bicycle kick in the danger zone of Dwarfs missed narrowly.

Allies continued to fight for the opener and came close again in the seventh minute when Richmond Lamptey was put through, but his brilliant connection to Isah Ali’s pass was saved by goalkeeper Razak Issah in post for Dwarfs.

A few minutes later, Paul Abanga also had an opportunity to open the scoring for Allies, but his bullet grazed the bar and went out of play to the relief of Dwarfs.

Dwarfs gradually warmed themselves into the game and also started attacking in droves with long balls and came close in the 17th minute but Moro Sumaila’s shot bounced off the bar and went wayward.

Both sides built strong walls in defence to ward off attacks, and while Allies relied on quick inter-positional passes to break through the walls, Dwarfs relied on long balls to counter attack.

The same trend continued after the break, with occasional messing up of goal scoring opportunities until the 71st and 77th minutes when Acquah and Sumaila came to the rescue of Dwarfs with two brilliant goals to consign Allies to the bottom of the league with seven points from 13 matches.