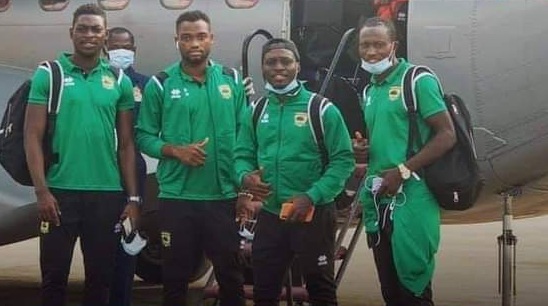 Players of Kotoko before they left for Mauritania
30.5k Shares

The CAF Champions League match between Kumasi Asante Kotoko and Mauritania’s Nouadhibou has been moved to Sunday, November 29.

The continental football head announced the new date in a press statement.

Kotoko arrived in Mauritania on Wednesday with a Ghana Airforce chartered flight to prepare for their continental game which was initially scheduled for Friday, November 27.

The Porcupine Warriors are looking forward to record their first victory this season having drawn their opening two Premier League matches against Eleven Wonders and Berekum Chelsea.

Coach Maxwell Konadu and his 20-man squad left for Mauritania and is expected to be without inspirational skipper Felix Annan through injury.

Also, the likes of Habib Mohammed, Augustine Okrah, Razak Abalora and Mudasiru Salifu are all not available for the first leg encounter.