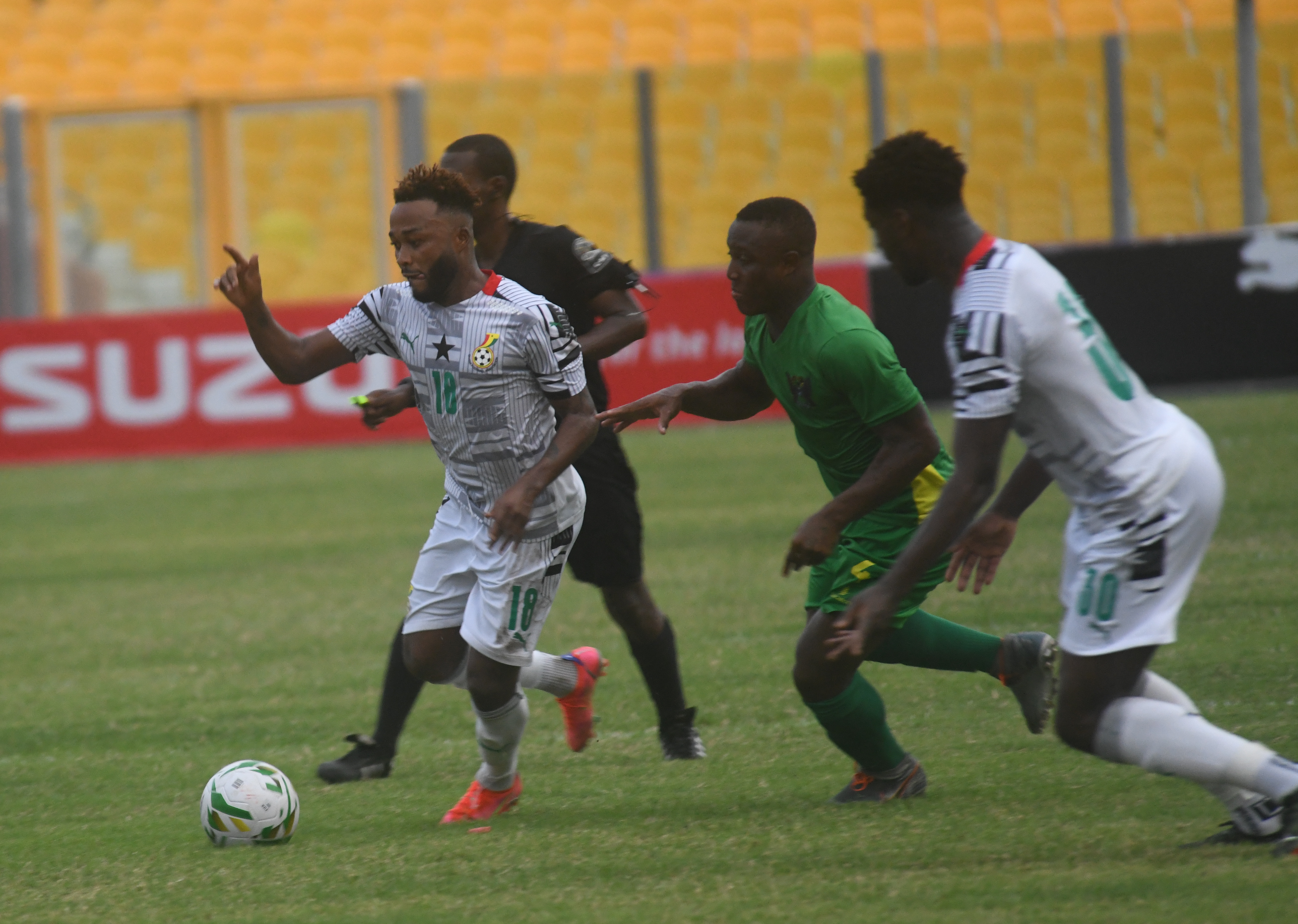 Gladson Awako (left) pounce on the ball after beating his markers
30.5k Shares

Complacency denied the Black Stars of Ghana a possible cricket scoreline as they defeated the Falcons of São Tomé and Príncipe 3-1 in their final Africa Cup of Nations qualifier at the Accra Sports Stadium on Sunday March 28.

The Andre Ayew-led team went into the match assured of a place at the 2022 AFCON so they played a relaxed game and hardly moved into the third gear as goals by Nicholas Opoku, Jordan Ayew and Baba Abdul Rahman ensured the Stars ended the qualifiers on a winning note to finish as Group 3 winners and qualify alongside Sudan who defeated South Africa to book a place at the continent's biggest football competition in Cameroun.

There was an anti-climax to Ghana's deserved victory as Skipper Andre Ayew limped off the field injured during added-on time.

In an attempt to score a last minute goal, Ayew latched onto a pass at the goal area of the Falcons, took on two defenders before delivering a powerful shot which goalkeeper Aldur Cravid de Almeda punched back into play.

But before the Swansea midfielder could pounce on the ball for a second bite of the cherry, a São Tomé defender chopped him down and injured him in the process.

It took Ghana's medical team over five minutes to help him back to his feet and he limped off the pitch in pain.

The inclusion of the England-based trio of Andre, Thomas Partey and Jordan, all of whom missed the team's previous match with South Africa, ensured that Coach Akonnor had the full complement of his foreign-based stars for a match which was only of academic importance.

However, rather than put up a five-star performance, the Ghana side appeared complacent and often hanged onto the ball needlessly instead of effective inter-positional passes which eventually affected the teamwork and allowed their opponents to grow in confidence as they came close to opening the scoring through Luis Leal Dos Anuos against the run of play.

The São Tomé forward was a thorn in the flesh of the Black Stars defenders and his combination with Joel Piresquincas Das Neves and Ricardo Guerosa Cardoso in the fifth minute saw the latter coming close to scoring but he hesitated at the edge of Ghana's penalty box and allowed defender Ismail Abdul Ganiu to clear the ball to safety.

A few minutes later Dos Anuos had another opportunity to score but his shot narrowly missed target. It was a wake-up call for Akonnor's charges who put their act together and shot into the lead in the 12th minute when centre-back Nicholas Opoku outnumber his markers and headed home a corner kick by Muhammed Kudus for his first international goal for Ghana.

The goal fired up the Black Stars who started punching holes in the defence of their visitors and in one of such moves Admilson De Lima Vegas hacked down Jordan Ayew in the box in the 29th minute, causing the referee to point to the spot.

Jordan elected himself for the kick and scored beautifully to give Ghana a 2-0 lead and also celebrate his 17th goal in 63 appearances for the team.

On the hour mark, left-back Baba Abdul Rahman connected a pass from Kudus to score his first international goal and increase the tally to 3-0.

With victory secured, the Stars paid the price for a momentary lapse in concentration as goalkeeper Razak Abalora, in an attempt to clear a back pass by substitute Moro Ibrahim, gifted the ball to Fernandes Carvalho who intercepted the poor clearance and lobbed the ball behind the goalkeeper to give São Tomé an 83rd minute consolation goal.