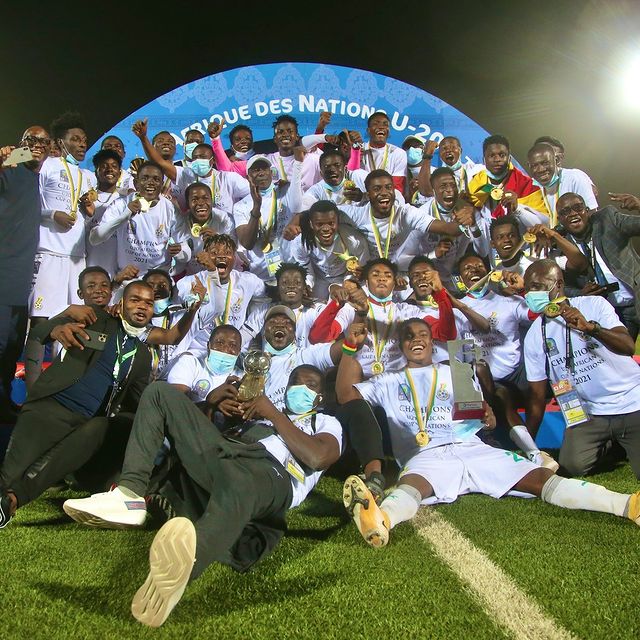 THE victorious Black Satellites returned home as heroes yesterday, after winning the U-20 Africa Cup of Nations tournament by two goals against Uganda in Mauritania on Saturday March 6.

The contingent of players and officials arrived aboard a military aircraft (Flight 551) at the Air Force Base at Burma Camp at exactly 4 p.m.

They were met by the Minister of Youth and Sports, Mr Mustapha Ussif; the Vice-President of the Ghana Football Association (GFA), Mr Mark Addo; the Chief Executive of the National Sports Authority, Professor Patrick Twumasi, among other dignitaries.

Members of the Ghana Supporters Union created a carnival atmosphere yesterday — the exact opposite of the team’s relatively quiet departure for the tournament — as Mr Ussif led the players and officials from the tarmac to the arrival hall where an elaborate ceremony was held to welcome and congratulate the triumphant team on winning a fourth continental title and reclaiming it for the first time in 12 years.

The minister acknowledged the team's impressive feat and said they could not have gifted the country with a better present to celebrate its 64th Independence anniversary, noting that the entire country was proud of their achievement.

He told the players and officials that President Nana Addo Dankwa Akufo-Addo was extremely excited by the honour they had brought to the nation and was looking forward to meeting them at the seat of government, the Jubilee House.

Mr Ussif acknowledged the difficulties the team had to go through to win the ultimate and expressed his pride in their ability to surmount the challenges to dominate and win the continental title.

“I know you are going to achieve a lot and make this country proud,” he said.

The Satellites’ victory over Uganda in last Saturday’s encounter at the Olympic Stadium in Nouakchott could not have been better timed. On the day Ghana celebrated its 64th Independence anniversary, Coach Abdul Karim Zito’s team put the icing on a spectacular campaign with an important victory before some distinguished guests, including the Head of football's world governing body, FIFA, Gianni Infantino, and the top executives of the continental body, CAF.

Satellites’ Skipper, Daniel Afriyie Barnieh, provided leadership from the front as he scored a goal in each half to clinch Ghana's fourth continental youth trophy, after previous wins in 1993, 1999 and 2009.

The significance of the occasion was not lost on Coach Zito's charges, who greeted each goal with a military salute march, as is typical of Ghana's Independence Day celebrations.

Following that conquest, President Akufo-Addo sent the team a congratulatory message, saying he was ready to receive the trophy, the players and the officials at the Jubilee House.

“Congratulations to the Black Satellites on winning Ghana’s 4th AFCON U-20 trophy. A thoroughly deserved victory, and they’ve made Mother Ghana proud. What a way to celebrate our 64th Independence Anniversary!!

"Kudos to the team, and I look forward to receiving the playing, technical and management teams at the Jubilee House,” the President tweeted.

Ghana's victory was a reflection of the team's dominant performance in the tournament. Their forward, Abdul Fatawu Issahaku, was named the competition's Best Player, having scored two brilliant goals and being a key part of the team's success story, while Danlad Ibrahim won the Best Goalkeeper award after keeping four clean sheets and conceding three goals in six matches.

The duo automatically gained selection into the U-20 AFCON Best XI team.

Ghana's feat brought them at par with Egypt on four championship trophies, as they chase Nigeria on seven trophies.
As captain, Barnieh saved his best for last with a man-of-the-match performance and two important goals, the first of which was a sublime strike as he ghosted past his marker to connect a 21st-minute corner kick with his heel.

Half an hour later, he scored his second goal as he got to the end of a square pass by Precious Boah in Uganda's penalty box and secured victory with a simple tap in.

Although debutants, the Hippos of Uganda reached the final after demolishing Tunisia 4-1 in the semi-finals to send a strong message to Ghana. And last Saturday they looked bent on making a big statement against the pre-match favourites as their leading marksman, Derrick Kakooza, who had scored five goals going into the final, nearly broke the deadlock in the fifth minute after outpacing his marker, but his final delivery missed the target, much to the relief of the Ghanaian defenders.

It was a wake-up call for the Satellites, as they took the game to their opponents, until Barnieh set them on course for victory in the 21st minute and drilled the final nail in the Hippos' coffin in the 51st minute and held on to victory.