Are Kotoko ready for Medeama challenge? 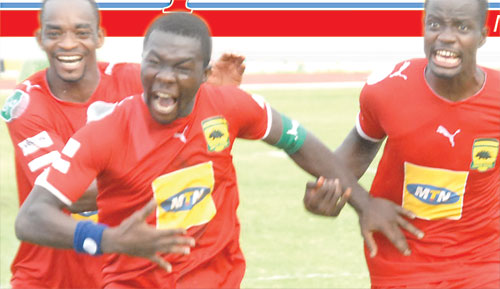 After holding Hearts of Oak to a 1-1 draw last Sunday, Kumasi Asante Kotoko will be faced with another difficult task tomorrow when they host dethroned league leaders, Medeama SC, at the Baba Yara Stadium in the 25th week fixtures of the Glo Premier League.

Tomorrow’s game in Kumasi will provide an opportunity for the Porcupine Warriors, who trail league leaders Berekum Chelsea by a single point, to climb to the summit of the league log. But Medeama, whose ego was bruised by Liberty Professionals after losing 1-2 at their Tarkwa base last Sunday, will be looking for an opportunity to reclaim the top position.

King Faisal will travel to the Robert Mensah Stadium in Cape Coast to lock horns with Ebusua Dwarfs, while Liberty Professionals will welcome struggling Berekum Arsenal to the Carl Reindorf Park at Dansoman.

Accra Hearts of Oak trek to Tamale to battle relegation-bound RTU, Ashantigold host Kpando Heart of Lions at the Len Clay Stadium at Obuasi, while Wa All Stars will play as guests of New Edubiase United to the Gyamfi Park at Bekwai.

Chelsea will play Tema Youth at the Golden City Park at Berekum, while Amidaus Professionals host Aduana Stars at the Tema Stadium on Thursday.