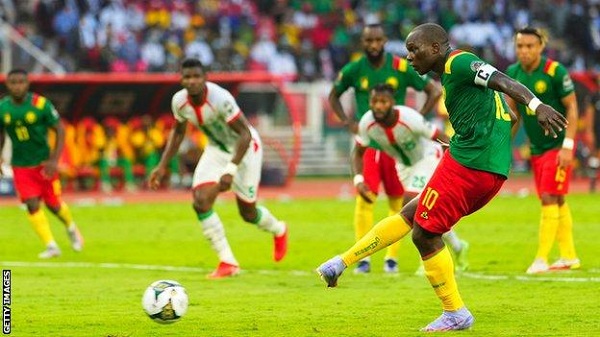 Cameroon came from behind to beat Burkina Faso 2-1 in an incident-packed opener at the Africa Cup of Nations.

An acrobatic volley from Gustavo Sangare put the Burkinabe ahead midway through the first half in Yaounde, but two unerring penalties from captain Vincent Aboubakar turned the game around for the hosts before half-time.

The Indomitable Lions’ keeper Andre Onana made two crucial second-half saves as Toni Conceicao's side opened their Group A campaign with victory.

The Nations Cup has been delayed a year by the coronavirus pandemic, but the first game in the Olembe Stadium, which followed a colourful opening ceremony, served up an absorbing contest.

Burkina Faso’s defender Steeve Yago was lucky to only see yellow for a first-minute sliding tackle on Collins Fai, which was the first of several rash challenges which ultimately cost the Stallions.

Burkina Faso took the lead following their first sustained period of pressure after Bertrand Traore saw his header from a corner cleared off the line by Nouhou Tolo and Sangare clipped the crossbar with a cross.

Aston Villa forward Traore picked up the loose ball on the right wing and crossed to the back post for Sangare, who showed brilliant technique to send a first-time volley inside the left-hand upright.

Gustavo Sangare celebrates his goal against Cameroon
Gustavo Sangare netted the opening goal of the tournament with a superb left-footed volley
Cameroon were undaunted but were handed the chance of an equaliser five minutes before the break when Traore clumsily brought down Andre-Frank Zambo Anguissa.

The penalty was awarded following a video assistant referee review, and Aboubakar sent goalkeeper Herve Koffi the wrong way from the spot and stroked the ball into the right-hand side of the net.

The hosts then got a second penalty in first-half injury time when Issoufou Dayo slid in on Tolo after the Cameroon defender had played the ball.

Aboubakar, who scored the winner when Cameroon last lifted the Nations Cup in 2017, made no mistake second time around as he went the other way with his penalty.

After the restart Onana kept out an ambitious long-range free-kick from Traore and then denied Cyrille Bayala from close range.

Aboubakar was denied a hat-trick by a tight VAR offside call, while Zambo Anguissa fired narrowly wide as the Indomitable Lions looked to put the game to bed.

The hosts, who are looking to lift the continental trophy for a sixth time, are back in action on Thursday against Ethiopia.