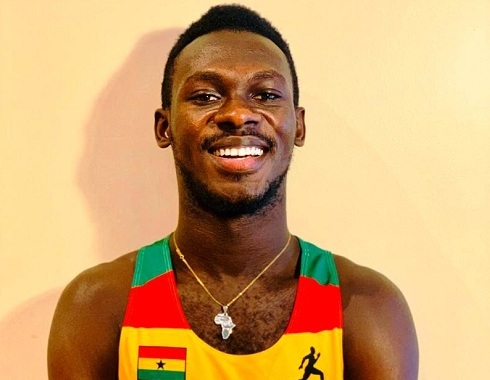 Running for West Texas A&M University, the 23-year-old sophomore put on a show to break the existing national record of 9.98 seconds set by Leonard Myles-Mills, then running for Utah-based Brigham Young University, at the 1999 NCAA Division I Outdoor Track & Field Championships.

An impressive performance it was as Azamati ran under 10 seconds for the first time and not only broke the 38-year NCAA Div. II record but also ran the fastest time in the year to become the top ranked sprinter in the world.

The time was also well under the 2021 Olympic Standard of 10.05 seconds which made him only the third Ghanaian after sprinter John Amoah and triple jumper Nadia Eke to qualify for the Tokyo Olympics in July.

It was a reward for hard work by the native of Akim Oda who has showed promise in the last three years since winning the GNPC Ghana's Fastest Human athletics competition in 2019 then as a student of the University of Ghana, Legon. Incidentally, two years after winning the athletics talent hunt competition, Azamati developed his talent to cement his status as the fastest Ghanaian ever on tracks and has the potential to achieve even greater exploits.

He was part of Ghana's gold medal-winning quartet in the men's 4x100 metres at the 2019 African Games in Rabat, Morocco, and later participated at the World Athletics Championships in Doha, Qatar.

Last year, he ranked fifth in the USA in the 60-metre dash in a time of 6.69 seconds at the Lone Star Conference and also run a seasonal best time of 21.91 seconds in the 200 metres race.