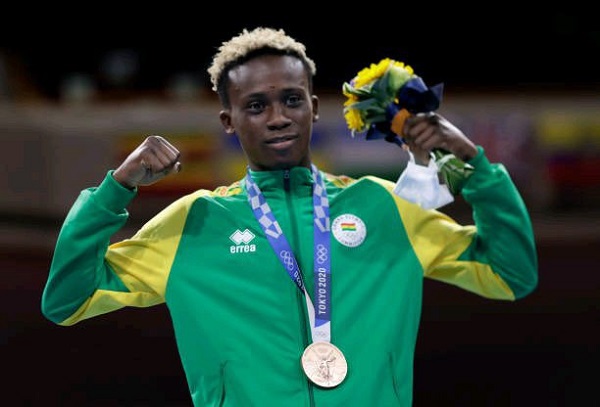 Samuel Takyi had a successful year under review
30.5k Shares

Ghana’s boxing sensation, Samuel Takyi, is the favourite to be named the flagship Sports Personality of the Year at this year's MTN Sports Writers Association of Ghana (SWAG) Awards today after a successful year.

The Olympic bronze medalist will go head to head with Accra Hearts of Oak forward Daniel Afriyie Barnieh and the national 4x100 athletics relay team which reached the final of the Olympics in Tokyo.

Takyi became a household name when he ended the nation’s 29-year-wait for an Olympic medal with a bronze medal at the featherweight division.

The Jamestown-born fighter’s achievement was also the first Olympic boxing medal for Ghana since Prince Amartey won bronze at the 1972 games in Munich.

Barnieh, on the other hand, enjoyed an amazing year after winning three titles with Hearts of Oak and the national under-20 team, Black Satellites.

The youngster won the Ghana Premier League and MTN FA Cup titles with Hearts and also annexed the U-20 Africa Cup of Nations with the Black Satellites to cap a successful year.

The national sprints team also set a national men's 4x100m record after qualifying for the finals of the Olympics, having made the required time at the World Athletics Championships in Silesia, Poland.

As part of the event, the Vice-President, Dr Mahamudu Bawumia, will be the Guest of Honour, with the Ga Mantse, Nii Tackie Teiko Tsuru II, as the Special Guest of Honour at the gala at the Accra International Conference Centre to honour Ghana's most outstanding sports personalities.

In other categories to be competed for, Daniel Amartey [Leicester City], Mohammed Kudus [Ajax] and Jonathan Mensah [Columbus Crew] were nominated for the Footballer of the Year (Foreign) while Daniel Afriyie Barnieh (Hearts of Oak) has been tipped to beat Diawisie Taylor (Karela United) and Ismail Abdul-Ganiyu (Asante Kotoko) for the Footballer of the Year (Home Based) category.

Sekondi Hasaacas Ladies captain Janet Egyir, who has led her team to win five trophies and also reach the final of the maiden CAF African Women's champions League, is the favourite to beat off opposition from Constance Agyemang (Berry Ladies) and Jafar Rahama (Northern Ladies/Hasaacas) for the Female Footballer of the Year prize.

National amateur boxing trainer Coach Ofori Asare is a strong favourite for the Coach of the Year award as he competes with Hearts of Oak’s Samuel Boadu, while the Athlete of the Year (Male) award is a straight fight between US-based sprinters Benjamin Azamati and Joseph Paul Amoah.