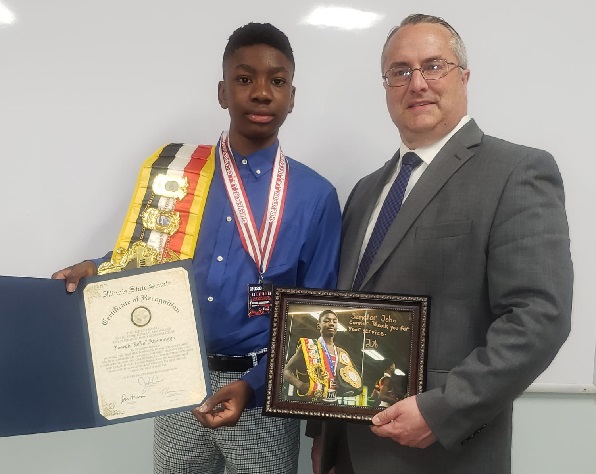 The senator of Illinois, John R. Connor, has welcomed American-born Ghanaian juvenile boxer Joseph Awinongya Jnr and his family to his office.

The 14-year-old fighter caught the eyes of the senator of his state after winning the USA Nationals for the 8th time .

Senator Connor told the family that he was overwhelmed by the dedication of Awinongya Jnr and the achievements he had chalked in the sport at his age.

He noted that the young fighter must be encouraged to serve as an inspiration for other upcoming boxers within Illinois.

"I'm happy to receive you in my office and for making Joliet and the State of Illinois proud" Senator Conor said.

"You are a role model for your peers and inspiration to many.”

The senator discussed future projects he will undertake with Awinnongya Jnr and presented him with a certificate of recognition by the state.

Awinongya Jnr in  exchange also signed an autograph for the senator to show appreciation for his support.

The 8x USA National Champion, 3x Silver Gloves Champion and 2x Jr Olympic Champion is looking forward to adding  to his collection and making history in the upcoming Junor Olympics scheduled for July 7 -17 in Lubbock, Texas.