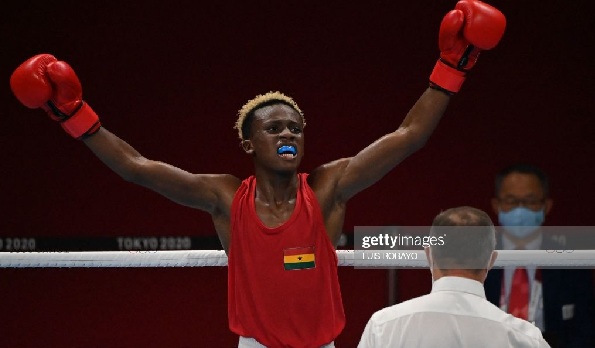 Ghana’s only medal hopeful, Samuel Takyi, says his focus remains winning an Olympic gold for Ghana after his emphatic victory over Columbia’s David Ceiber in their featherweight fight on Sunday.

The 20-year-old boxer said he was focused on fulfilling his promise to the nation by going past America’s Ragan Duke at the semi-final stage of the competition.

Takyi won a 3-2 split decision on the judges’ scorecards after losing the first round of the bout to make history by ending Ghana’s 29-year wait for an Olympic medal.

The boxing gem will at least return home with a bronze medal should he lose to the American in the semi-final bout.

In an interview with the Graphic Sports from his Tokyo base yesterday, Takyi said he was going to work harder to qualify to the final to enable him to stand a chance of winning gold.

“I am very happy to have achieved this feat at my very first Olympics, but the work continues because winning gold for Ghana remains my target.


“That is the promise I made to Ghanaians and I have to fight for that. I am hopeful that I can get past my American opponent on Tuesday and that is exactly what I am working towards,”Takyi said.

Takyi remains Ghana’s only hope for a gold medal in boxing after compatriots Shakul Samed and skipper Sulemanu Tetteh were eliminated at the light-heavyweight and flyweight divisions respectively.

He is the only athlete among Ghana’s contingent at the games to have secured a medal.

From the Discipline Gym in Accra, Takyi’s rise to fame has been swift, having qualified to the games in his first attempt, as well as winning a medal.

Meanwhile, Black Bombers coach, Kwasi Ofori Asare, says they will fight to the end to ensure Takyi comes out with a gold medal.

He, however, explained that Takyi had been working hard to make history and that had really helped him at the Olympics.

“We have worked really hard to get to this stage and we are not going to be complacent now that we have the opportunity.

“It is going to be tough but we will do everything possible to get there and I believe he has what it takes to reach the final,” Coach Asare told Graphic Sports.