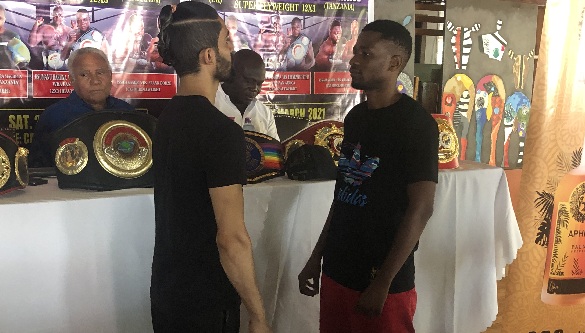 Patel is confident of an emphatic victory over Kisarawe, with the hope of breaking into the division after a vital win.

Patel sure of victory

Speaking at a press conference to announce the fight last Tuesday, the British fighter said he was ready to make his second attempt at the belts count on March 27 against Kisarawe.

“I am glad to have this opportunity to showcase my talent in Africa and I am confident of victory.

“Kisarawe is one of the best flyweights in Africa and it will be an interesting fight. I can only promise you of a resounding win,” Patel assured.

The two boxers are in Ghana to headline a bill dubbed ‘Night of Championship,’ which is being put together by Soaq Empire Promotions.

However, Kisarawe is also ready to offer Patel a stiff opposition by putting up a splendid performance on Saturday.

He explained that a win over Patel would help him make a strong statement in the division and was therefore confident of ensuring that.

“I will give Patel a good fight because I need to return to Tanzania with the titles. It is very important for me and I promise to win.

“Winning all these belts will help me make a big statement for myself and the entire Tanzanian boxing community,” said Kisarawe.

On the night, Ghana’s WBO Africa super bantamweight champion, Isaac Sackey, will make a defence of his title against Gabriel Odoi Laryea.

Sackey returns to the ring in over a year since earning a unanimous decision victory over Michael Nyawade, while Laryea makes his second appearance this year.

The undercards will see Issah Samir clash with journeyman Frank Dodzi in a non-title middleweight bout, while Ghana's Osumanu Haruna and compatriot Ebenezer Tetteh slug it out for the WBA Pan Africa heavyweight belt.