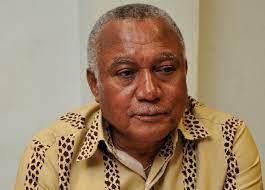 The World Boxing Organisation (WBO) supervisor in Africa, Samir Captan, has advised Ghanaian boxer Richard Commey must move up weight to be able to box effectively.

He also wants him to learn how to fight southpaw fighters and avoid over-training when going for an epic fight.

“When I watched the bout, I saw that Commey was dehydrated and had lost a lot of energy. His movement wasn’t like before. I can’t tell if he lost some weight, but this is not how Commey fights, and this is not the Commey I know,” he told the Graphic Sports in an exclusive interview in Accra last Tuesday.

Lauding Commey for putting up with the fight and showing enough courage to box Vasyl, despite the odds against him, Mr Captan said he wondered why the former IBF lightweight champion took up the fight too quickly without adequately preparing for one of the most feared boxers in the division.

“Such fights needs time. He should have taken his time. For such epic fights, you must study your opponent for a very long time. If you watch the bout, Lomachenko never wanted to hurt Commey. He took pity on him. It also appears Commey has never fought a southpaw before,” he stated.

“When he knocked Commey down in the seventh, he called on his corner to throw in the towel, but they didn’t listen. There is a way to fight a southpaw that makes it impossible for him to throw his left effectively,” he noted.

Mr Captan urged Commey to train harder and build powerful punches that would have an effect on his opponents in his next fight.

“He did well, particularly against the calibre of opponent Lomachenko is. If he moves up weight, he can fight better,” the former president of the Ghana Boxing Authority (GBA) stated.

He also argued that Commey didn’t get enough training and appeared to be on the back-foot in the entire fight.