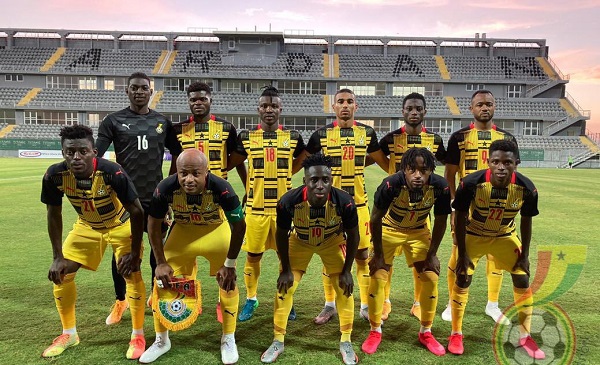 A brace by skipper Andre Dede Ayew and a goal each by Tarique Fosu, Samuel Owusu and Caleb Ekuban gave Ghana a resounding 5-1 victory over Asian champions Qatar in their second international friendly at the Mardan Sports Complex in Aksu, Turkey on Monday.

Unlike their harrowing 0-3 defeat to Mali last Friday which saw the Ghanaians struggling to contain their West African neighbours, the Black Stars this time played with much confidence and scored in rapid succession in the second half.

Five new faces
Coach Charles Kwablan Akonnor introduced five new players, including goalkeeper Razak Abalora, with Benson Annang making his debut on the right flank. Joseph Aidoo also started in place of the injured Nicholas Opoku, with Baba Iddrisu getting a chance to feature in midfield as Alexander Djiku was shifted to defence, while Al Fayha winger Owusu also replaced Eugene Ansah who failed to impress on his debut against Mali.

Qatar had the first chance to score in the second minute when Almoez Ali was put through by Abdulaziz Hatim, but the former’s shot hit the post and bounced back into play to the relief of the Ghanaians.

Scoring chances
The Black Stars accepted the challenge and started putting their act together with crisp and inter-positional play as they pushed their opponents deep into their half but failed to open their defence to create scoring chances.

In the 13th minute, skipper Dede Ayew latched onto a pass midway into the half of their opponents and weaved through his markers but his right footer was too feeble to beat goalkeeper Saad Al Sheeb.

The Ghanaians continued to probe for the opener which finally came in the 22nd minute through Fosu, who tapped in the ball from a deep cross.

Jordan Ayew masterminded the goal by beating two defenders on the right flank before releasing a pass across the goal area for Fosu to finish off.

Five minutes later, Jordan could have added his name to the score sheet, but his shot missed target.

Qatar put more men in defence to ward off the Ghanaians’ attack but that could not stop Samuel Owusu from making inroads in the vital area of the 2022 World Cup hosts in the 29th minute but goalkeeper Sheeb denied him a goal with a brilliant save.

As the Black Stars’ confidence soared, they began to multiply in attack, leaving the Asians to capitalise on a gap in defence to pull parity.

The Qataris stunned the Black Stars by scoring the opening goal

Almoez Ali took advantage of a long ball, sneaked through his napping markers and onrushing goalkeeper Abalora, before firing the ball into the yawning net to cut short the Ghanaians’ jubilation.

However, the second half saw the Stars sparkling to tame their opponents, with midfield general, Thomas Partey, in control of affairs and floating long searching balls into the territory of Qatar.

One of such piercing passes found Owusu, who controlled beautifully before slotting the ball into the net to add his name to the score sheet in the 63rd minute.

Two minutes later, Dede Ayew hit a brace in the 82nd and 88th minutes before substitute Caleb Ekuban scored to put the game beyond Qatar’s reach two minutes later to give Ghanaians a big relief.