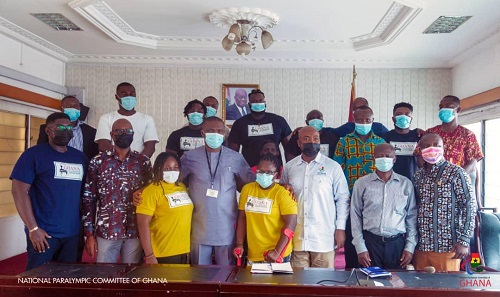 Minister of Youth and Sports with the Powerlifting team
30.5k Shares

THE Minister for Youth and Sports, Mr Mustapha Ussif, has challenged the national Para Powerlifting team, the Black Optimists, to make the nation proud by qualifying for the Paralympic Games when they compete in the qualifiers in Manchester, United Kingdom (UK).

That will be one of the last events that will offer an opportunity for para athletes to book their qualification to the Paralympic Games in Tokyo later in the year.

The minister threw the challenge to the para athletes when a contingent led by the President of the National Paralympic Committee, Mr Samson Deen, bid the minister farewell prior to their departure to Manchester on board a British Airways flight last Monday for the qualifiers.

''The whole country is behind you; we are praying for you to go there and make us proud. I am very sure that all of you are going there to qualify so that you can participate on the bigger platform in Tokyo so that you'll lift the flag of this great country high,'' the minister said.

To further motivate the Black Optimists, the minister promised to reward them adequately when they return with medals to prove to the other physically challenged persons that the contribution to national development was not only limited to the abled persons.

Mr Deen explained that the athletes would gain automatic qualification to the Paralympic Games once they make it in Manchester and added that another set of athletes were in Cape Coast preparing for Commonwealth Games qualification in Dubai.