Attuquaye gets Man of the Match award 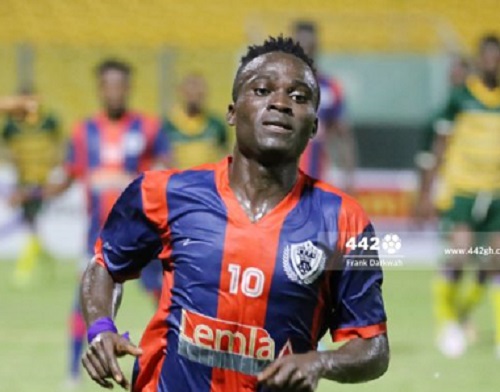 Accra-based Legon Cities midfielder, Jonah Attuquaye, put up a spectacular display to be crowned Man-of-the-Match during their 3-2 victory over Real Tamale United in their Ghana Premier League game played at the Accra Stadium last Saturday.

The 21-year-old was the star man on the day following his brilliant display on the pitch together with a amazing penalty kick which helped his side earned the maximum points in an action-packed contest that saw the host dominated the first half.

Speaking at the post-match interview, Attuquaye expressed their determination to perform better than what they did last season and added that the award would motivate him to go the extra mile to ensure the team does well.

“Today’s victory is what we need to progress forward. We want to do something different from what we did last seasons and so far, four points in two games this season is good for us. Award like this also serves a great source of inspiration for me to do more,” he said.

Saturday’s win is the ‘Royals’ first victory in the league this season after drawing goalless in the opening game against the defending champions, Accra Hearts of Oak.
Legon Cities defender, Joseph Adjei, scored the opening goal for the host on the 22nd minute but that was canceled seven minutes before the break by former AshantiGold midfielder, David Abagna Sandan.

Nathaniel Acquah restored the lead for The Royals nine minutes after recess before Jonah Attuquaye scored from the spot to make it 3-1 with 18 minutes to go.
However, Abagna grabbed a brace five minutes later, also from the spot but his strike was not enough to salvage a point for the Premier League returnees.