Ashgold will be our next victim - Faisal skipper warns 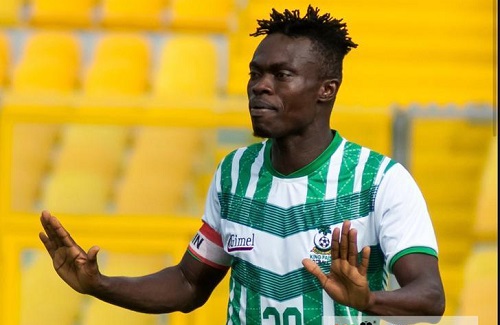 King Faisal skipper, Richard Akrofi, says his club’s 3-1 victory over Aduana Stars at the Nana Agyemang Badu I Park at Dormaa-Ahenkro last Sunday is a warning to the rest of their Premier League opponents to be battle-ready.

He explained that having broken the jinx against Aduana Stars at Dormaa-Ahenkro, King Faisal were poised to add Ashantigold to their victims in Kumasi on Sunday to prove their readiness to make a mark in the ongoing Ghana Premier League (GPL).

“We have now consigned our victory over Aduana last Sunday to history. Our focus now is to add Ashgold to our victims and sound a strong warning to the other participating teams in the GPL that King Faisal are hungry for honours,” skipper Akrofi revealed.

Alhaji Gruzah’s boys again defied all odds and invaded Dormaa-Ahenkro to wrest the maximum points and ensure a clean record.
Now second on the league table with six points from two matches, scoring four goals with one against them, Akrofi believes that with tactical discipline, hard work and determination, King Faisal could be one of the most competitive teams this season
He said having escaped relegation last season, King Faisal had a new squad now comprising young, determined and disciplined players who wanted to improve the fortunes of the club this season.

“A few of our players are from Kotoko, but many come from Division One and Division Two who are very talented and determined to make a name for themselves. We are not only poised to make Faisal very competitive in the league, but also determined to increase our support base in the Kumasi Metropolis.

“I, therefore, appeal to football fans to always rush to the Baba Yara Stadium anytime we are playing to offer us their support in order to excel,“ Akrofi stated.

He also attributed their recent exploits to the expertise of their technical team headed by Coach Nuru Ahmed, saying, “we have a determined and disciplinarian coach who always wants to achieve good results,” he added.