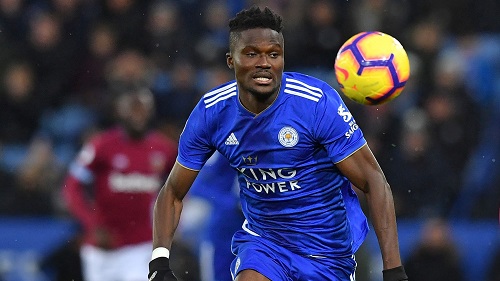 Leicester City centre back, Daniel Amartey, returned to action for his club on Sunday as they beat Tottenham Hotspur 2-0 at the White Hart Lane.

The 25-year-old who was introduced in the 60th minute to replace Tim Castagne to consolidate their 2-0 victory over Jose Mourinho’s charges.

The Ghana international has not played for his club in two months following a hamstring injury he sustained last October while playing against West Ham.

His introduction was seen as helping to strengthen the defense of his side having taken 2-0 lead in the game courtesy Toby Alderweireld own goal in the 59th minute after Jamie Vardy had shot them in the lead in the first half through a penalty.

His return would came as a major boost for Black Stars coach, Charles Kwablan Akonnor, who would be hoping to strengthen his back line as he plays his final round of Africa Cup of Nations (AFCON) qualifiers next year against South Africa and Sao Tome and Principe.