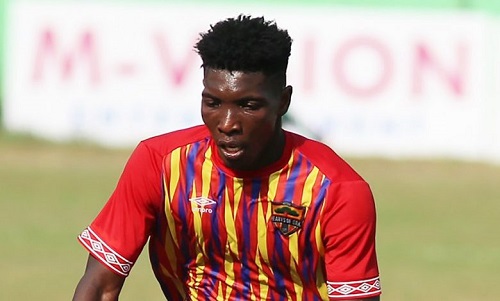 The manager of the 25-year-old player, Daniel Tackie, confirmed to Graphic Sports last Friday that his ward signed for the newly promoted Premier League side this week after passing his medicals.

According to him, negotiations between Afutu and Hearts fell through simply because the Phobian club could not meet their demands.

Throwing more light on the deadlock between the player and the Rainbow Club in an exclusive interview last Friday, Mr Tackie said the negotiation did not fall through on financial grounds as was being presumed by many.

He said the two parties could not agree on the percentage of playing time that should be allotted to the player, stating that while they negotiated for a 70 per cent of all games for the player, the club was unwilling to commit to any percentage as a first team player.

“They (Hearts of Oak) told us that they cannot continue with us. They wanted the player and they gave us a draft of the contract about what they can offer and we also saw some loopholes and asked that they should rectify them or do something about it, but they said they cannot do anything about it because they cannot guarantee that, so virtually they said okay we have to call it off,” he said.

He further stated that the decision to end the negotiation “was about percentage playing time and incapacitation”, explaining that when the player was unable to continue his career due to injury he must also benefit from club.

He said afterwards they took a decision not to continue with the negotiation but Hearts later came back agreeing with their proposals, by which time they had also pulled out.

“They told us they could not continue so we also took a decision and they came back that whatever we have proposed they have agreed with them but I told them we have taken some decisions based on what they told us and we have to reverse those things.

“If we are able to reverse those decisions, we’ll be able to sign or extend the contract. Unfortunately, we couldn’t reverse it because any false attempt could land my player in a serious problem that would jeopardise his career, so we had no option but to move on,” he explained further.