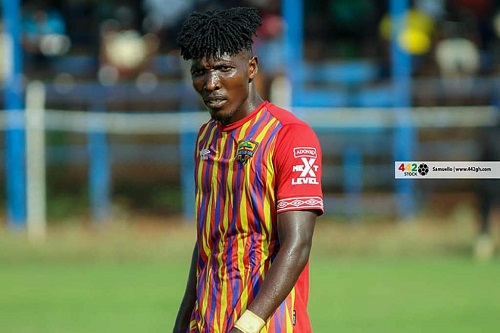 Daniel Tackie, manager of sensational Hearts of Oak midfielder, Benjamin Afutu, has confirmed he was in negotiating with the Ghana Premier League champions for the player to return to the club after his contract expired at the end of last season.

Afutu, one of the star players in Hearts' Premier League and FA Cup double-winning feat, is yet to commit his future to the club and his next destination had remain uncertain as he was linked with a lucrative move to an unnamed foreign club.

However, Tackie revealed to the Graphic Sports yesterday that they [Afutu and manager] they were at an advanced stage in negotiations with the Phobians and were hoping to deal with a few bottlenecks in the way of a new contract.

Mr Tackie said his player did not receive money from any club nor had a pre-contract with any club outside Ghana was earlier reported in the media.

“It is never correct, Afutu has not taken any money from anyone neither has he signed any contract with any club outside. We are still in negotiation with Hearts of Oak and there are some bottlenecks that we have to clear, once it is cleared Afutu will play for Hearts,” he stressed.

However, an insider earlier revealed to the Graphic Sports last Friday that 25-year-old Afutu had become stranded now due to a poor decision he took while playing for Hearts.

He allegedly received an undisclosed amount of money from an unnamed club in Africa with the promise of joining them should they gain promotion to the elite league. Unfortunately, the club reportedly failed to gain promotion and, therefore, the agreement fell through.

Afutu was a key player in the heart of Hearts’ midfield last season as the Phobians dominated the domestic season and won the Premier League for the first time in 11 years.

He was among five players nominated for the NASCO Player of the Season award which went to his teammate Salifu Ibrahim.