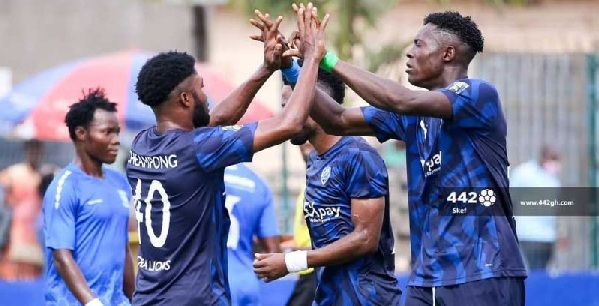 Accra Lions secured their first win of the season with a 2-1 victory over Bechem United in Accra last Saturday.

First half goals from Christopher Acheampong and Rauf Salifu ensured a loud roar by the Lions for the first time this season, but Augustine Okrah pulled one back for the visitors.

Lions started the game on a good note with back-to-back corner kicks in the first 10 minutes, but the Hunters came into the game as the clock ticked.

The homesters grabbed the opener after a beautiful piece of play saw Christopher Acheampong pouncing on a pass in the vital area of Bechem United before cooly slotting it home to break the deadlock.

Six minutes later, Lions profited from another brilliant play between Fredrick Akatuk and Rauf Salifu, but the latter was fouled in the box. Salifu, who elected himself for the spot kick, expertly converted it to register the second goal.

From recess, Bechem United returned strongly and reduced the tally through Augustine Okrah on the hour mark.