Schools close down - Only BECE and WASSCE candidates attend classes 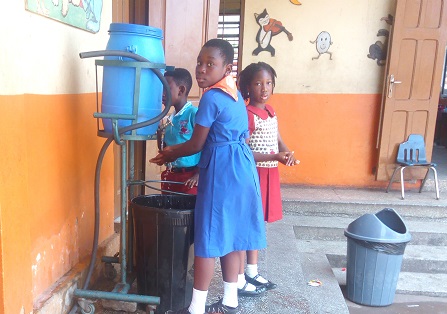 Some schoolchildren of the Tot-to-Teen International School was their hands using the Veronica bucket
30.5k Shares

Schools have been closed down, effective Monday, March 16, 2020, following a directive by President Nana Addo Dankwa Akufo-Addo as a measure to reduce the spread of the coronavirus, COVID-19.

As of Sunday, March 15, 2020, Ghana had confirmed six coronavirus cases.

In an address to the nation last Sunday night, the President said all universities, senior high and basic schools, both public and private, should close down until further notice.

The Ministry of Education, in collaboration with the Ministry of Communications, was tasked to roll out distance learning programmes.

Additionally, all public gatherings, including conferences, workshops, funerals, festivals, political rallies, sporting events and religious activities, have been suspended for the next four weeks.

A visit by the Junior Graphic to some schools at Adabraka, a suburb of Accra, on Monday, March 16, 2020 showed that they had adhered to the President’s directive to suspend classes, reports Yolander Jessica Parker-Allotey.

The Head Teacher of the St Joseph Catholic School, Adabraka Official Town, Mrs Margaret Ama Ankamah, said some parents and schoolchildren had come to the school to confirm the shutdown.

She said only JHS Three students were allowed in the school, adding that they had been provided with Veronica buckets, soap and paper napkins in order for them to observe basic hygiene rules.

The situation was the same at the Presbyterian Preparatory and the Additrom schools.

The Headmistress of the Presbyterian Preparatory School, Mrs Mercy Obeng-Akrofi, said preparations were being made to draft a timetable for the teachers to go to school on a shift basis.

Before the latest directive by the President, some schools within East Legon, La Nkwantanang, Madina and Adentan in Accra had already put measures in place to protect their pupils from the coronavirus, reports Emmanuella Asare and Yolander Jessica Parker-Allotey.

The authorities of Tot to Teen School Limited at  Adentan had provided hand sanitisers for all classrooms and running water to enable the children to wash their hands after playing, before and after eating and after using the washroom.

Also, the children had been educated on the virus, its effects and how to avoid contracting it.
In an interview with the Junior Graphic, the Headmaster of the De Youngster’s International School at Adentan, Mr Kevin King, said the school had provided Veronica buckets with handwashing soap for the children.

He said the authorities had urged all children and staff to get hand sanitisers for themselves and launched a sanitation initiative dubbed: “Don’t Drop To Pick” aimed at making the school the cleanest in the Greater Accra Region.

The Faith Community Baptist School at Madina has started educating the schoolchildren on the virus every Wednesday during worship time. Basins are also provided for handwashing and the children have hand sanitisers which they are encouraged to use regularly.

According to a source in the school, the students had been educated on the virus and its preventive measures, but they were unable to afford hand sanitisers and tissue.

The Holy Rosary R/C JHS at Adentan has educated its schoolchildren on the symptoms of the coronavirus and the preventive measures which can be taken to safeguard their health.

The school has provided about three Veronica buckets for children to wash their hands regularly.

Speaking on the measures that had been put in place to protect them, a JHS Two student of the school, Richmond Asare, said he had stopped  playing with animals, he washed his hands regularly and used his hand sanitiser.

Another student, Sandra Dzatogo, said she washed her hands after playing, used her sanitiser regularly and barely shook hands with others.

Daniel Lafia, a JHS Three student of the De Youngster’s School, said he washed his hands regularly and did not touch his face.