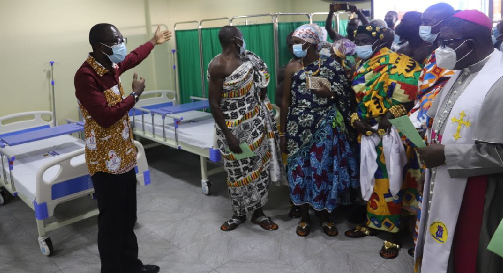 Estimated at a cost of GH¢7.5 million, the health centre, which started operating in 1985 as a small health post, has now metamorphosed into a fully-fledged hospital to serve the needs of the people of Aburaso and neighbouring communities.

It was established following the formation of the Methodist Medical Association (MMA) in 1986, by the then Chairman of the Kumasi District of the Methodist Church, Rev. Major (retd) Christian E. Bonney.

The facility now has a theatre, which was one of the key requirements for the centre to attain its current status.

The Presiding Bishop of the Methodist Church Ghana, Most Reverend Dr. Paul Kwabena Boafo, together with the Akromoasehene, Nana Kwadwo Sah II, last Saturday cut the tape to officially inaugurate and dedicate the facility at Aburaso, near Akromoase.

"I am happy to say that our hospital is one of the most efficient and fast developing public hospitals in this district," the Administrator of the hospital, Mr. Gaddiel Godson Otoo, said during the event, adding that "so far 100 surgeries have been done successfully."

He said statistics indicated that there had been a massive increase in attendance in the number of patients that visited the hospital, 10,180 in 2018 to 15,284.

He noted that all other indicators had gone up, which indicated the focus and contribution to the Sustainable Development Goal (SDG)3, which covers and focuses on the various aspects of a healthy life and healthy lifestyle.

Mr. Otoo commended the General Manager of the Methodist Health Facilities in Kumasi, Mr. Joseph Atta Amankwah and other well-wishers for the instrumental roles they played in championing the upgrade of the clinic to its current status as a hospital.