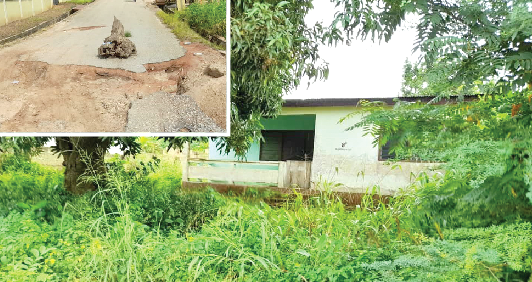 One of the deserted estate buildings belonging to an organisation taken over by weeds. INSET: A street with a log warning drivers of danger
30.5k Shares

All over the country, these flats were manned by the Social Security and National Insurance Trust (SSNIT) through their estate officers who ensured that facilities did not deteriorate.

However, since SSNIT washed its hands off by selling the flats to tenants and handed over the maintenance of key facilities such as roads, the preservation of such facilities has been shirked.

SSNIT few years ago, through an agreement called the condominium between the residents’ associations and the metropolitan, municipal and district assemblies, handed over its responsibilities of maintenance to the MMDAs.

The agreement, among others, assigned the duty of the maintenance of roads, water and sanitation to the MMDAs, while the resident owners took care of their flats since it had become their bonafide properties.

One of such areas in Koforidua where the maintenance of roads has become a mirage is the Adweso SSNIT flats.

Just like other SSNIT flats built across the country, the Adweso Estate, which comprises semi-detached buildings was well-planned.

Nonetheless, the beauty of the estate is gradually eroding due to bad roads. Sections of the roads in the estate have developed potholes, making it difficult for drivers to drive from one part to the other.

Some of the drivers in trying to dodge the potholes put the lives of schoolchildren in the area in danger, particularly when entering the estate from an area called 205.

It is very frightening, especially in the afternoon when schools close and children are going home. Surrounding the estate are various schools including Saint Dominic Primary and Junior High School, Trinity Presbyterian School and the Wesley International School.

Some of the bad estate roads include Mahogany, Mandela and Juaben streets. The recent heavy rains have not helped matters, as a vital bridge linking the Assemblies of God Church to the estate has been washed off, forcing drivers to make a detour through alternative routes.

Some reputable companies, whose workers have either been transferred or retired, have abandoned their unoccupied buildings to be overgrown with weeds, thereby serving as breeding grounds for reptiles and several pleas to the Eastern Regional offices of the companies in question to, at least, clear the vacated buildings of the weeds have fallen on deaf ears.

The New Juaben South Municipal District Environmental Health Department recently threatened to take these recalcitrant organisations to court. A neighbour of one of the deserted residencies out of frustration decided to take it upon herself to get someone to clean the place but decided not to continue on second thought.

An officer of one of the organisations, who wants to remain anonymous, told the Daily Graphic that despite several letters no help seems imminent.

Some few areas are without street lights thus making it easy for thieves to have a field day. Just recently, four people had their car batteries stolen under the cover of darkness.

Responding to the woes of the Adweso Estate and what was being done to remedy the situation, the Assembly Member for the area, Mr. Rapchar Botchway, who is also the Presiding Member of the New Juaben South Municipal Assembly, gave an assurance that all was not lost and that challenges facing the community were being addressed gradually.

He was happy that the community now had a clinic to address the health needs of the people, unlike what pertained in the past where residents had to go to either the Koforidua Regional Hospital or the Providence Hospital at Abogri to receive primary health care.

On street lighting, he said enough had been done, however there was more room for improvement.

He said authorities in the road sector had been contacted to fix the deplorable portions of streets in the estate.