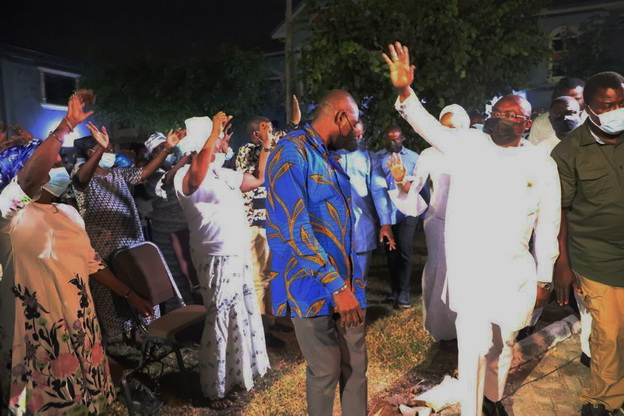 “The Year 2022 will bring better times for Ghana”, the Vice President, Alhaji Dr Mahamudu Bawumia, has assured the people.

He said Ghana continues to soldier on and continues to be on its feet in spite of her socio-economic challenges as a country, heightened by the novel COVID-19 pandemic.

“The world has suffered a lot because of the pandemic. The pandemic has brought about the worst depression in the economic circumstances of the world since the 1930s”, he emphasized.

“Many, many countries have been affected adversely, and have seen so many prices going up”, the Vice President bewailed.

That notwithstanding, Dr Bawumia stressed that with the strong foundation already laid by the President Akufo-Addo led government, he was optimistic that this year will be a successful year, and appealed to all religious bodies to also continue to pray to God to grant the President the wisdom and financial muscle to transform this country.

Watch night services
Dr Bawumia told congregations when he worshiped with some churches in Kumasi at separate Watchnight services to usher in the New Year.

He worshiped at the Breman Methodist Church, the St. Peter's Cathedral Basilica, and the Ayigya Pentecost Church, all in Greater Kumasi, Ashanti Region.

The Vice President was accompanied by his wife, Mrs Samira Bawumia, and some government officials.

They included Mr Osei Kyei-Mensah-Bonsu, the Minister In charge of Parliamentary Affairs and Member of Parliament for Suame; the Ashanti Regional Minister, Mr Simon Osei Mensah; and the Metropolitan Chief Executive of Kumasi, Mr Samuel Payne.

Religious tolerance
Dr Bawumia urged all religious bodies to continue to co-exist peacefully as that was a key ingredient needed to building a prosperous nation for ourselves and posterity.

“We are a country where different faiths co-exist very peacefully. The majority Christian population and the minority Muslim population, we all co-existed very, very peacefully”, the Vice President lauded.

He said Ghana was touted the second most peaceful country in Africa, and the most peaceful in West Africa, and urged the people to continue to practice peace in the coming years and help guard our enviable accolade.

The Vice President, who also reminded the congregations of his youthful days where he was a member of the Boys Brigade (BB) of the Methodist Church, admitted it has helped to inculcate in him the sense of steadfastness and certainty.

Sermons
In a sermon, Very Reverend Benjamin Ansong, Superintendent Minister in Charge of the Breman Methodist Church, told Ghanaians to be positive, and that negative thoughts and pronouncements were contagious and should therefore not be countenanced by the society.

He pointed out that a positive attitude and approach always yielded good results and urged the congregation and Ghanaians not to yield to negative talks of impossibilities but rather be encouraged by thoughts of possibilities.

Resist LGBTQI+
At the St. Peter's Cathedral Basilica, The Most Reverend Gabriel Justice Yaw Anokye, Archbishop of the Kumasi Archdiocese of the Catholic Church, used the opportunity to urge Ghanaians to resist any attempt to promote, propagate or legalize same sex in the country.

“We will resist this un-Godly practice with our last blood”, the man of God warned.

However, he advised Ghanaians against putting the law into their own hands by molesting and attacking persons known to be in the homosexual unions, and advised that such persons be reported to the appropriate agencies.