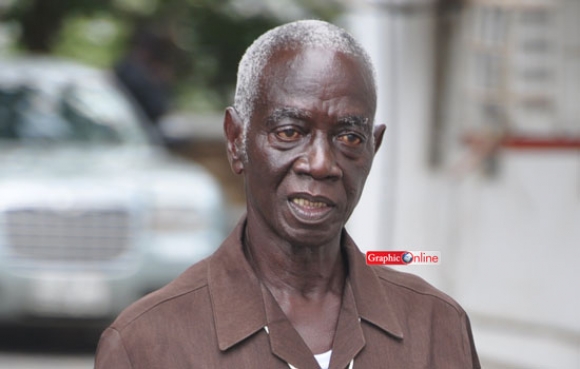 The Electoral Commission (EC's) decision to use the Ghana Card as the only source document for continuous voter registration can disenfranchise millions of qualified electorate, a former Chairman of the EC, Dr Kwadwo Afari-Gyan, has stated.

Speaking exclusively to Graphic Online, he said with many Ghanaians finding it difficult to get their Ghana Cards, making it the only form of identification for voter registration was against electoral inclusivity, fairness and justice.

“Ghanaian citizens don’t lose their citizenship if they are 18 years or older but do not have the Ghana Card. So, the moot question is: why make the Ghana Card the only means of identification for purposes of establishing eligibility to register to vote,” Dr Afari-Gyan queried.

The longest-serving chairperson of the EC in the history of the country was sharing his thoughts in a statement made available to Graphic Online exclusively on a new Constitutional Instrument (C.I.) on voter registration which has been laid before Parliament by the EC.

The Executive Secretary of the National Identification Authority (NIA), Professor Kenneth Attafuah, disclosed to the media last month that his outfit had handed over 15.7 million Ghana Cards to Ghanaians, out of 16,969,034, who had registered.

For Dr Afari-Gyan, who served for 22 years between 1993 and 2015, the fact that the number of people with Ghana Cards included those below the voting age of 18, and juxtaposing that with the Ghana Statistical Service’s projection that people aged 18 years and above would hit 19.5 million in 2023, the potential for many people to be disenfranchised as a result of the use of the Ghana Card as the only source document for voter registration was high.

He advised the EC to take a careful look at its insistence on the Ghana Card because in spite of its crucial role in elections, the EC was not the decider of elections, but rather the electorate.

“The electorate are the kingmakers. So, a basic responsibility of any electoral commission is to facilitate the realisation of the people's right to register as voters, and not to obstruct that right by demanding for registration purposes documents that are not easily accessible to the people,” he added.

Per the new C.I, which would become law after 21 sitting days of Parliament, the EC is seeking to make the Ghana Card the sole form of identification for eligible voters who want to get unto the electoral roll.

The C.I has been referred to the Subsidiary Legislation Committee of Parliament. By convention, the committee is chaired by a member of the Minority group.

Orders, rules or regulations made pursuant to provisions of the Constitution or an Act of Parliament must be laid before Parliament for 21 sitting days before they come into force.

Any such subsidiary legislations so laid are referred to the committee to determine whether it is in accordance with the general objectives of the constitution or the Act pursuant to which it is being made.

It also determines whether the legislation contains any matter, which in the opinion of the committee should be dealt with in an Act of Parliament; directly or indirectly bars the jurisdiction of the courts; gives retrospective effect to any provision contrary to provisions of the Constitution or an existing Act; involves expenditure from the Consolidated Fund or has a form or structure which calls for further elucidation, among other things.

Even before the EC had laid the new C.I before Parliament, the opposition National Democratic Congress (NDC) accused the EC of planning to compile a new voters register for the 2024 general election, with the Ghana Card as the only source document.

The Minority Leader in Parliament, Haruna Iddrisu, said any move by the EC to compile a new voters register with the Ghana Card solely as the mode of identification would not bode well for the country, especially when the EC had already expended huge sums of money to compile a new register which was used for the 2020 general election.

The EC debunked the assertion by the NDC and said the new C.I was only meant to regulate continuous registration, with the Ghana Card as the source document.

“We are not compiling a new voters register. The one we compiled in 2020 is a credible one, a very good register so we are not dispensing it,” the Director of Electoral Services of the EC, Dr Serebour Quaicoe, told the media.

Meanwhile, in Parliament, the new C.I laid by the EC caused heated debates, with the Minority calling for the EC to come and explain the rationale for the use of the Ghana Card as the only source document.

At Parliament’s sitting on July 21, this year, the First Deputy Minority Chief Whip, Ibrahim Ahmed, said it was necessary for the EC to brief the House on the new C.I. to erase any “controversial issue of mistrust.”

For his part, the Majority Leader, Osei Kyei-Mensah-Bonsu, rejected the call by the Minority, describing it as premature, adding that the next general election was not yet due.

Per the new C.I, the E.C envisages to conduct the exercise from its district offices, with the district registration supervisor and the registration centre supervisor reporting to the regional officer.

To Dr Afari-Gyan, with the proposed arrangement, it meant fewer registration centres as compared to the number of polling stations, a situation he fears could be problematic with regard to the polling centres that will be assigned to the registered voters, and how the voters will know their assigned polling stations.

“One way to dodge this problem is to use a voters register that is not polling station specific on Election Day,” he said.

The former EC boss, who succeeded Justice Josiah Ofori Boateng, who headed the Interim Electoral Commission which conducted the 1992 general election, also faulted the new C.I for proposing two new kinds of voters register, namely electoral area register and constituency register.
Such a move, Dr Afari-Gyan contended, could give rise to multiple voting and ballot stuffing, because the Biometric Verification Devices (BVDs) at the various polling stations were not interlinked to know a voter who had already voted.

“Until such time that the BVDs are configured to be interactive in this way, my concern about any of the two registers being used at the polling station on Election Day is that it opens the door more widely to two kinds of voting infractions, namely multiple voting and ballot stuffing,” he added.

Below is a copy of the full statement

The Electoral Commission (EC) has placed before Parliament a draft of a Constitutional Instrument (CI) entitled: Public Elections (Registration of Voters) Regulations, 2021.  I am hopeful that Parliament will do a careful scrutiny of its provisions.  I also presume that the Inter-Party Advisory Committee (IPAC) is privy to the provisions of the CI.

Be that as it may, clearly, the voters register does not belong to the political parties, the EC, and Parliament.  It is a national property, so it is appropriate for ordinary Ghanaians to express their views on the possible import of the provisions in the impending CI.  In that vein, I have concerns about three aspects in particular that I think need to be carefully thought through.

My first concern is that, simply put, if the CI comes into effect, you cannot register to vote if you don’t have what is popularly known as the Ghana Card.  I don’t know if and when the EC intends to do a new register.   I have a Ghana Card, so I can register at the next opportunity under the impending CI.  Even so, I find the Ghana Card requirement to be worrisome.

It is common knowledge that, as at now, many Ghanaians who would otherwise be eligible to register as voters do not have the Ghana Card.  Information available to me indicates that, as at July 2022, the National Identification Authority (NIA) had actually issued over 13 million cards to Ghanaians, including an unspecified number of persons below the voting age.  This figure is much less than the 17 million voters registered by the EC in 2020. On top of that, based on figures from the 2020 Population and Housing Censure, the projected number of Ghanaians aged 18 years and above will be about 19.5 million by the end of 2023. Taken together, the information would indicate that if the EC were to do a new register based only on the Ghana Card any time soon, the likelihood is that millions of Ghanaians might be disenfranchised.

Clearly, that would be unfair and contrary to the principle of electoral justice.  One of the tests of a good voters register is that, as far as practicable, it is inclusive of the persons eligible to register as voters.  That aside, in spite of their leading role in elections, election administrators are not, so to speak, kingmakers: the electorate are the kingmakers. So, a basic responsibility of any electoral commission is to facilitate the realization of the peoples’ right to register as voters, and not to obstruct that right by demanding for registration purposes documents that are not easily accessible to the people.

Ghanaian citizens don’t lose their citizenship if they are 18 years or older but do not have the Ghana Card.  So, the moot question is: why make the Ghana Card the only means of identification for purposes of establishing eligibility to register to vote?   Aren’t there other means of identifying citizens?  For a straightforward example, why can’t the Voter ID Cards the EC itself issued to over 17 million Ghanaians in 2020 be acceptable?

My third concern has to do with the register that will be used at the polling station on Election Day.  Should this sound trite, even stupid, let me explain the basis of the concern.

As far as I know, as at now, the Biometric Verification Devices (BVDs) that are used to identify voters at the various polling stations do not, so to speak, talk to each other in the field to indicate who has voted at which polling station.  Until such time that the BVMs are configured to be interactive in this way, my concern about any of the two registers being used at the polling station on Election Day is that it opens the door more widely to two kinds of voting infractions, namely, multiple voting and ballot stuffing.  Multiple voting is where one person votes more than once.  Ballot stuffing is where an unscrupulous person puts into the ballot box additional ballot papers that were not duly cast in accordance with the election law.

At the same time, using any of the two registers changes the meaning of over-voting from more people voted than were certified to vote at a specific polling station.  Over-voting will mean more people voted than the number of persons listed in the electoral area register or the constituency register, as the case may be.  Given that voter turn-out is never a hundred percent, this will be extremely difficult, if at all possible, to detect and investigate, let alone prove.