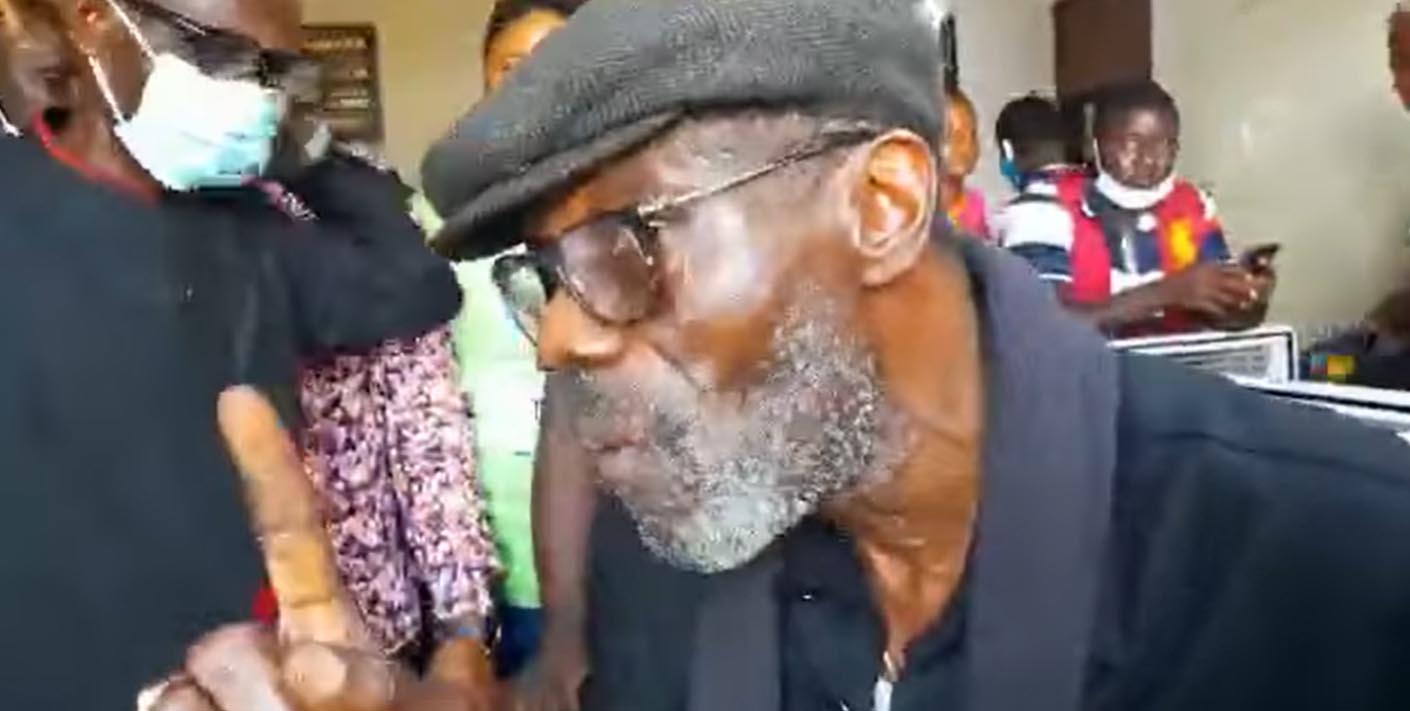 Lieutenant Colonel Larry Gbevlo-Lartey (rtd) asking the Returning Officer to give them a copy of the sheet
30.5k Shares

The leadership of the opposition National Democratic Congress (NDC) have paid a visit to the Electoral Commission (EC) office in the Techiman South Constituency in the Bono East Region to demand copies of the pink sheets and collation sheet used to declare the New Patriotic Party's (NPP) candidate, Martin Adjei Mensah Korsah as the Member of Parliament-elect.

According to the party, the EC manipulated the figures in favour of the governing NPP.

Last Thursday, the NDC's presidential candidate, John Dramani Mahama in reiterating his stance not to accept the results declared by the EC said: “We are deploying an additional crack teams of lawyers and senior Party officials to support them [constituency officers]."

"Also, in order not to leave any further infractions unaccounted for, the NDC will continue its meticulous audit of all presidential pink sheets to ensure that the verdict of the people is upheld."

"These steps will surely lead to our next line of actions within the constraints of our democratic governance process," John Dramani Mahama indicated. "We want to send a caution to the EC that in line with Regulation 47 of CI 127, they should ensure that election data is preserved for a year, after elections," Mr Mahama said.

During their interaction, the Returning Officer for the constituency told them to go to the regional office where he had sent the copies including that of the NDC.

On Election Day and during the collation, the NDC raised some objections and the subsequent confusion at the place where the collation was being done called for an intervention by the security agencies.

The NDC insisted that the results were not officially declared by the Returning Officer.

However, the NPP has debunked that assertion and gone ahead to show a video indicating the returning officer officially declaring the results, whilst some men from the NDC attempted to attack and snatch the megaphone with which he was announcing the results.

Read also: It is not true EC did not declare Techiman South collation results - NPP

The video shows a security officer intervening to prevent the megaphone from being snatched.

Techiman South: This was when the Returning Officer was declaring the results of the 2020 Parliamentary election results pic.twitter.com/HTCPTU3f5L

The NDC team members who were at the EC's office included General Secretary Johnson Asiedu Nketia, lawyer Kojogah Adawudu, Lieutenant Colonel Larry Gbevlo-Lartey (rtd), Baba Jamal, Collins Dauda and some others who all tried to impress on the Returning Officer to give them the copy.

What John Mahama posted on Facebook about the Techiman South Parliamentary results declaration and the intervention by the security agencies.

VIDEO BELOW: Throwback: After the December 7, 2012 elections

Throwback: Year 2000 towards the Dec 28 Runoff - Mahama, Akufo-Addo talking about accepting election results.
This was when Ghana was heading towards the Dec 28, 2000 runoff after John Agyekum Kufuor had the highest votes but could not obtain over 50% of the valid votes cast when he competed with John Evans Atta Mills in the first round on Dec 7, 2000.
topstories, trending, #Election2020