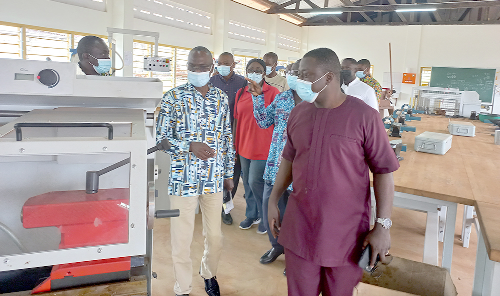 The Ranking Member of the Parliamentary Select Committee on Education, Mr Peter Nortsu-Kotoe says it is time for public universities to wean themselves of government subventions.

He said universities should be able to generate enough revenue to at least undertake some infrastructure development and set up foundations to seek sponsorship to fund their research and other programmes.

Mr Nortsu-Koe, who is also the National Democratic Congress (NDC) Member of Parliament for Akatsi North, stated this when members of the committee toured some of the Technical Vocational Education Training institutions in the Ashanti Region last Wednesday.

He was impressed with some of the investment’s made by the Akenten Appiah-Menka University of Skills Training and Entrepreneurial Development (AAMUSTED) and the Kumasi Technical University (KsTU).

For instance, the AAMUSTED has built a 1000 capacity lecture hall and an ICT incubation centre, while the KsTU has also put up a classroom block at its Built Environment Technology campus at Adako-Jachie, all from Internally Generated Fund (IGF).

“That is what we expect them to do,” he stated.

Mr Nortsu-Kotoe admitted that running a university was a very expensive endeavour but noted that “universities are not for teaching alone but for research and development as well.

“So, what is important is that the universities, particularly the technical universities, can generate a lot of revenue and make sure they are able to stand on their own,” he suggested.

According to him, most of the traditional universities in the country were unable to develop “because they do not market themselves” and said it was high time they became innovative and generated enough revenue to undertake most of their infrastructure development.

In Ghana for instance, he said since the government was absorbing the salaries of lecturers and other staff, the universities could also help by generating enough funds for most of their expansion programmes and not necessarily wait on the government for subventions.