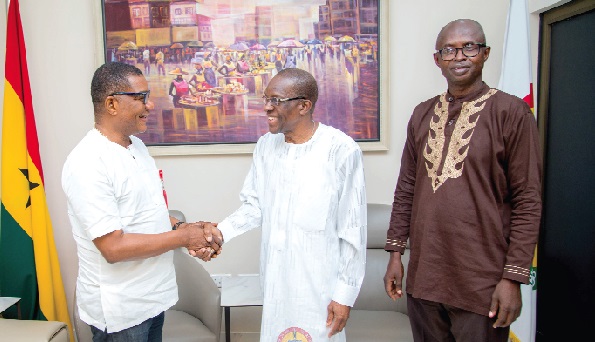 Most of the challenges facing the country are the result of a weak Parliament, the Speaker of Parliament, Alban Sumana Kingsford Bagbin, has said.

He said much of the waste, mismanagement and corruption that had led to economic downturns in the country could have been averted if Parliament had been strengthened to play its oversight responsibility effectively.

Mr Bagbin said this when the Editor, Graphic, Kobby Asmah, paid a courtesy call on him at his office at Parliament House in Accra last Friday.

Mr Asmah was accompanied by the Political Editor of the Daily Graphic, Albert Kwesi Salia.

The visit was to deepen the existing cordial relationship between Parliament and the Graphic Communications Group Limited (GCGL) and also seek the support of the Speaker in the production and sale of the 2023 Ghana Year Book (GYB), a publication of the GCGL.

Ghana Year Book (GYB) is an annual publication that takes stock of very important developments of the preceding year in the country.

In addition to improved content, it captures the nation’s events as they unfolded in the previous year.

The Speaker said his first year in office had focused on strengthening Parliament, while, in the second year, the emphasis had been on solidifying its oversight function.

That, he said, was to strengthen Parliament to enable it to hold the Executive arm of government and state institutions accountable to the people for the power, trust, resources and hope reposed in them.

"My first year in office as Speaker was used to strengthen Parliament and my second year is focused on ensuring that Parliament becomes more assertive and the government and state institutions account for their stewardship to the people," he said.

He indicated that when Parliament was strengthened and it played its oversight functions effectively, it would help deliver the goods to the people and consolidate the democratic culture of the country.

That, Mr Bagbin said, would gradually shift the public perception from the belief that Parliament was a weak institution and a rubber stamp for government policies.

Touching on his duties as Speaker, he said he did not only preside over proceedings on the floor of Parliament but also performed some administrative functions.

He explained that he had to go through all the questions that MPs had filed for each week's sitting to be asked of Ministers of State on the floor of Parliament, as well as the statements to be presented by members of the House, to ensure that they were "politically correct" before he admitted them, adding that every motion moved on the floor must come to the Speaker.

"That is the administrative role I play as Speaker, apart from presiding," he said.

Mr Bagbin noted that the current composition of Parliament, with each side of the House – Majority and Minority – having the same number, required a lot of consensus building in the interest of the nation.

He noted that the era of majoritarian rule in Parliament was no more and so it was time all came to terms with that reality to work together to enhance democracy for the good of the people.

He explained that the sitting arrangement of the House, which was of the ‘horseshoe’ order, meant that deliberations should not be confrontational on the floor of the House but dialogue, respect and candour.

The Speaker said most of the misunderstandings that had occurred on the floor of the House in the recent past of the Eighth Parliament happened in his absence but he had to take responsibility for them, since he was the presiding officer.

Mr Bagbin indicated that he had tried as much as possible to be fair and firm in his rulings anytime he presided.

On the issue of absenteeism, he said the work of MPs was not limited to only the chamber but included committee meetings, work in the constituencies and parliamentary duties outside the country.

He, therefore, noted that the issue of MPs being absent from the House was a tricky one, as some members went to the chamber, and once they were captured, they did not sit through but left, while others attended committee meetings.

However, he said it was the responsibility of every MP to sign the attendance book once he/she was within the precincts of Parliament.

The Speaker indicated that plans were underway to institute an annual Parliamentary Week to engage with the public to deepen understanding of how Parliament worked.

In addition, plans were in place to set up an electronic archive at Parliament House to bring the institution of Parliament closer to the people, where every information on legislature, both past and present, could be easily obtained or accessed, he added.

Touching on the independence of Parliament, Mr Bagbin said Parliament was a tenant on the land it occupied, as it had to write to the Executive for permission anytime it wanted to use the park at the forecourt of the State House.

He explained that since the space was also open to the public, any member of the public could have access to it, while events such as funerals and other public functions were also held there.

The situation, he said, posed a security threat to MPs, some of who, on many occasions, have had their vehicles broken into.

For his part, Mr Asmah expressed appreciation to the Speaker for the warm reception, as well as taking him through some of the challenges facing Parliament and also its workings.

He described the visit as educative and insightful, given the thoughts the Speaker had shared.

Mr Asmah gave an assurance that the Daily Graphic would continue to provide adequate coverage on Parliament for its cherished readers.

Touching on the GYB, the Editor, Graphic, said the 2022 edition had articles written by the Speaker and some MPs.

He explained that the visit was also to solicit the Speaker’s support for the 2023 publication of the GYB, as well as see if a space could be created within the precincts of Parliament for MPs to own copies.