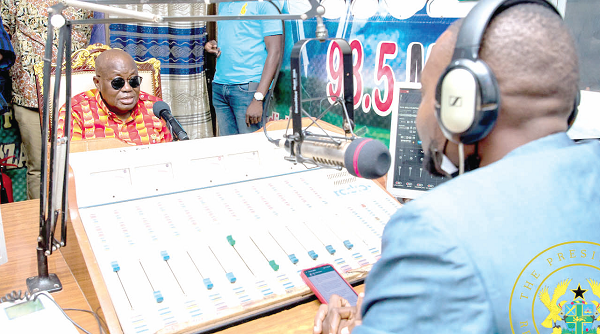 President Nana Addo Dankwa Akufo-Addo has said his team is working hard to reach a consensus on the appointment of metropolitan, municipal and district chief executives (MMDCEs).

He said various reports presented to him by committees set up for the selection process were currently being scrutinised by his team, and that very soon the list would be ready.

Eight months into his second term, the President is yet to announce his MMDCEs, a development that has raised concerns about the effective operations of the metropolitan, municipal and district assemblies (MMDAs).

But speaking with Tamale-based Justice FM last Saturday during his working visit to the Northern Region, the President said: “It’s been quite an exhaustive process and we are trying, as much as possible, to arrive at some consensus about them.”

President Akufo-Addo said it was because of the rigorous process and the delay in the process that his administration proposed the election of MMDCEs.

He expressed disappointment in the opposition National Democratic Congress (NDC) for pulling out on an earlier decision on the election of MMDCEs.

“I thought it was time in our history that we took multi-party politics to local government. Just as we elect MPs and the President, at the local level too let us elect our MMDCEs. But, unfortunately, the party opposite, after initially agreeing, later pulled out of that understanding,” he said.

President Akufo-Addo said it was his wish that the way Members of Parliament (MPs) and the President were elected by the people must apply at the local level.

“As you know, my original wish has been that MMDCEs will no longer be the patronage of the President and will not be appointed by the President but elected by the people,” he said.

“I took a view at the time that that was not an issue we should deal with on NDC and NPP basis, just like the way we went about the creation of the new regions,” he added.

The President said there was the need for a broad national consensus that would prevent a party from withdrawing from an agreement for the establishment of democratic participation in the election of MMDCEs.

That, he explained, would  deepen multi-party democracy, as well as make the selection process easier.

“Let us hope that a time will come when that consensus will allow us to do so,” he said.

President Akufo-Addo expressed the government’s resolve to continue working  closely with the chiefs and the people of the region towards consolidating the prevailing peace and harmony within the ancient Kingdom of Dagbon.

“All the assistance that my government provided to enable us to arrive at a settlement in Dagbon, which has brought peace and harmony to this ancient state, will continue to be forthcoming to make sure that we consolidate the peace and harmony that has taken place here,” he noted.

While commending the people of the region for the massive support they gave him in the 2020 general election, he said the region would receive its fair share of the national cake to improve on the lives of the people.