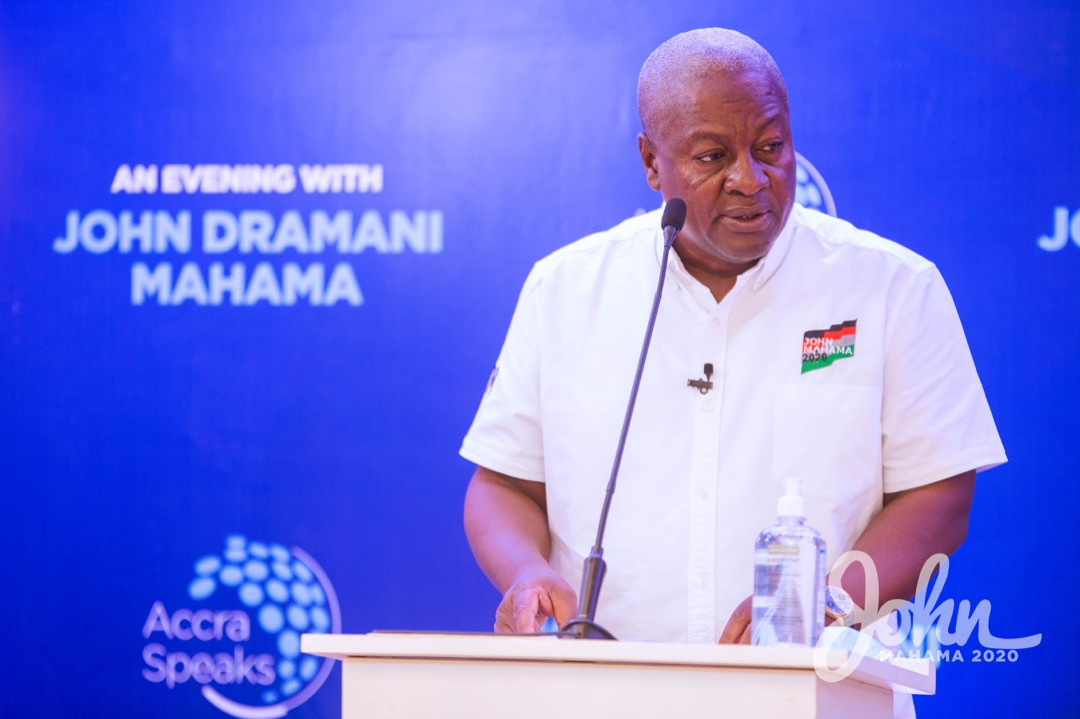 The Presidential Candidate of the National Democratic Congress (NDC), former President John Dramani Mahama has promised to resource and reform the public sector to make it more effective and create sustainable jobs for the teaming youth in his next administration.

He said a Human Resource Gap (HR Gap) analysis conducted by the NDC showed that although many vacancies existed in public sector institutions, the agencies were less equipped, not fully resourced and lacked the capacity to fill those gaps.

He said as part of the party's plan to create 250,000 jobs in a year under his second term, the party had resolved to make public institutions such as the Ghana Health Service, the Ghana Education Service and the various security agencies more effective and capable of filling the various vacancies that they were currently saddled with.

The former President declared the NDC’s job creation strategy when he met with some young business entrepreneurs in an evening encounter in Accra on Wednesday [November 4, 2020].

The engagement, which was interactive, offered the opportunity for NDC Presidential Candidate to highlight some of the promises contained in the party’s manifesto and also answer questions on how the party intends to govern when given the mandate in the December 7 election.

“Job creation will not only be the burden of entrepreneurs and the private sector. This explains why we have conducted a thorough Human Resource Gap (HR Gap) study into the public sector,” he assured the young business leaders who were drawn from the private sector.

He explained that “the analysis shows there was more room for graduate employment in the public sector as well. The Ghana Health Service has a human resource gap of 76,795”.

In the Ghana Education Service, he said the study concluded that there was a gap of 98,650.

Asa result, he said “NABCO youth in temporary employment within the public sector and graduates can be assured of permanent employment based on the Human Resource Gap Analysis we have conducted.”

Mr Mahama said in his next administration, all small businesses would be exempted entirely from corporate and personal income tax as promised in the Peoples’ Manifesto.

He said the NDC would also reduce corporate income tax from 25 percent to 15 percent for medium size companies.

In addition, he said newly established medium-sized companies that employ up to 20 staff will be exempted entirely from paying corporate income tax for one year.

Mr Mahama also assured the gathering that the next NDC government would exempt commercial vehicles and other equipment imported into the country for commercial, industrial and agricultural purposes from import duty.

“To save our struggling local automotive industry in Suame Magazine, Kokompe and Abossey Okai from collapse, we will review the Customs (Amendment) Act, 2020 (Act 1014) and scrap the law, which bans the importation of salvaged vehicles,” he said.

He explained that vehicle assembling companies would operate as a complement to local industry but not to cancel out the daily bread of Ghanaians.

The former President also highlighted that his next government would introduce a Rural Investor Incentive (RII) to motivate entrepreneurs to set up factories in rural areas.

“My dear entrepreneurs, we want you to locate some of your businesses in rural areas where the raw materials are produced. You will create jobs and help address rural urban migration,” he said.

Mr Mahama explained that under the RII, entrepreneurs who site their businesses in rural areas would be exempted from dividend and capital gain tax.

He said additional special tax incentives for indigenous value chain entrepreneurs in mineral processing, petroleum-based, agro-based, and pulp and paper-based industries would also be introduced by the next NDC government.