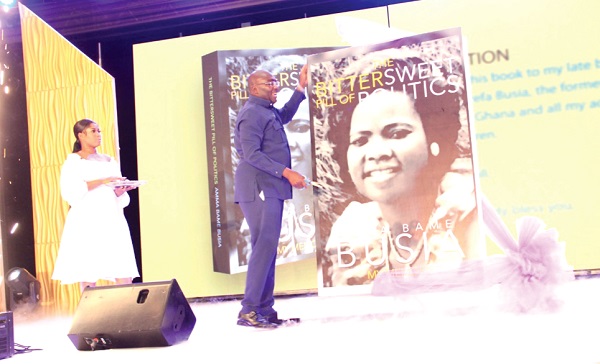 A book chronicling some intriguing political events in the country has been launched in Accra with a call on politicians and political parties to put national development agenda above parochial interests.

The launch of the book last Wednesday evening (November 23, 2022) brought together high-profile political figures across the divide.


Others were the ministers of the Interior, Ambrose Dery; National Security, Albert Kan-Dapaah; and Works and Housing, Francis Asenso-Boakye.

President Nana Addo Dankwa Akufo-Addo, who joined the event virtually, bought 100 copies of the book for GH¢100,000 and directed that they be distributed to libraries across the country.

Vice-President Bawumia also bought the book at GH¢50,000, with other patrons purchasing the book at prices ranging between GH¢5,000 and GH¢40,000.
President Akufo-Addo described the book as a great and important reference material for the country’s history.

He urged all Ghanaians in politics and those going into politics to get a copy of the book and learn from the sterling qualities of the author.

"The book is a good pointer for this generation of politicians and leaders to learn," he said.

For his part, the Vice-President eulogised the author, describing her as a staunch politician who lived a life worthy of emulation.

Reflecting on his encounter with Prof. Busia's family, Dr Bawumia said the family had contributed significantly to the country's development.

He added that it was good that some of the key issues had been captured in the book for the public to read.

For her part, Prof. Opoku-Agyeman said she was particularly happy that the narrative on Prof. Busia had been given from the perspective of a woman.

While celebrating the author for her work, the former NDC running mate said the book was great, especially so when it amplified the voices of women.

"The book removes the veil that has long overshadowed what other women can do," she said.

The author paid glowing tribute to Prof. K. A. Busia, describing him as a selfless leader who served the country with integrity.

She said her intention of writing the book was for it to serve as a guide to all politicians to remain focused, dedicated and let integrity be their hallmark at all times.

"As politicians, we need to know that our political opponents are not our enemies," she said.