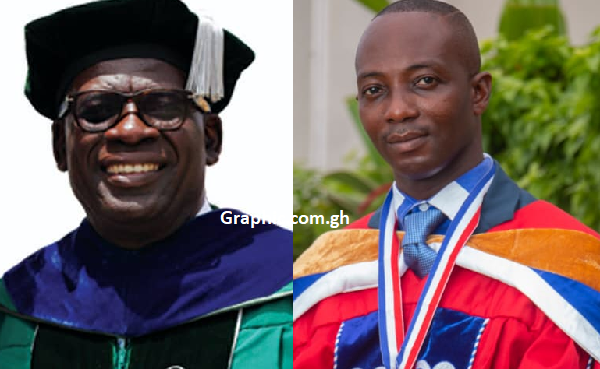 The University of Education, Winneba (UEW) will today March 15, 2021 elect a substantive Pro Vice Chancellor for the university after the previous election was nullified by the Winneba High Court.

Since July 2020, the university has been without a substantive Pro Vice Chancellor after the court presided over by Justice Aboagye Tandoh ruled that the Vice Chancellor, Rev Fr. Professor Anthony Afful-Broni did not have the right per the statutes of the university to nominate only three preferred individuals to contest in the election.

In the view of the court, the move by the VC restricted the choice to a chosen few at the expense of other qualified persons.

The court quashed the November 2019 election which gave the green light for the election of Professor Andy Ofori-Birikorang as the Pro VC of the UEW as the earlier election was declared null and void.

It further ordered the management of the UEW to re-run the election to elect a new pro vice-chancellor of the university.

However, management of the university appointed Prof Andy Ofori-Birikorang as the acting Pro Vice-Chancellor until today.

A notice of election to members of convocation dated March 12, 2021 and signed by Mr Jojoe Annan, Senior Assistant Registrar said “members of the university community are hereby informed that per new statute 11(2 & 3) which states” in the appointment of a Pro Vice-Chancellor, the Vice Chancellor shall nominate three academic senior members who shall be of professorial status with appropriate degree to be voted on by convocation”.

Pursuant to this, the Vice Chancellor has nominated Prof Andy Ofori-Birikorang, acting Pro VC, Prof Victus B. Samlafo, Vice Dean, Faculty of Science Education and Prof Emmanuel Obed Acquah, Director, Quality Assurance to contest for the position of Pro VC at the UEW.

It stated further that members of convocation shall go to the polls at the Winneba and Ajumako campuses on Monday, March 15, 2021 between 8am and 4pm to elect a substantive Pro VC for the UEW.

On June 10, 2019, Rev Fr Afful-Broni nominated Professor Yaw Ameyaw, then Director, Quality Assurance Directorate, Prof Dominic K. Danso Mensah, then Director, Institute for Teacher Education and Continuing Professional Development (ITECPD) and Prof Andy Ofori-Birikorang, then Dean, Faculty of Foreign Languages Education and Communication to be voted on by convocation for one of them to be elected as the Pro VC.

Management of the university organized the Pro VC election after the Winneba High Court on November 18, 2019, dismissed a suit filed by Dr Frimpong Kaakyire Duku, a senior lecturer and former President of the University Teachers Association (UTAG) UEW Chapter who challenged the matter in court.

On june 13, 2019, Dr Duku filed a certiorari application for the High Court to quash the decision of the VC to nominate candidates for the elections. Also, he filed an interlocutory injunction on the election pending the final determination and further argued in his suit that the move by the VC was a violation of the university’s statutes and the law establishing the university.

He contended that the decision by the VC was illegal and discriminatory as it denied many others, including him, the opportunity for the pro-vice chancellor position and as a result, the university subsequently suspended the election until further notice.

The Winneba High Court presided over by Justice Janapare A. Bartels on November 18, 2019, dismissed Dr Duku’s suit without going into the merits of the case on the basis that it had no jurisdiction to determine the matter.

It was the view of the High Court that the premise under which Dr Dukufiled the suit was wrong and therefore, it had no jurisdiction to quash the decision of the Vice-Chancellor.

Subsequently, Dr Duku dissatisfied with the High Court’s ruling through his counsel, Mr Alexander Afenyo-Markin invoked the supervisory jurisdiction of the Supreme Court by filling a certiorari application for the apex court to quash the earlier ruling of the Winneba High Court.

The five-member panel of the Supreme Court presided over by Justice Jones Dotse upheld Dr Duku’s application and subsequently quashed the decision of the High Court.

The court further ordered the case to be reheard by the Winneba High Court for determination. Members of the Supreme Court were Justices Dotse, Yaw Apau, Gabriel Pwamang, Agnes Dordzie and Mariama Owusu.