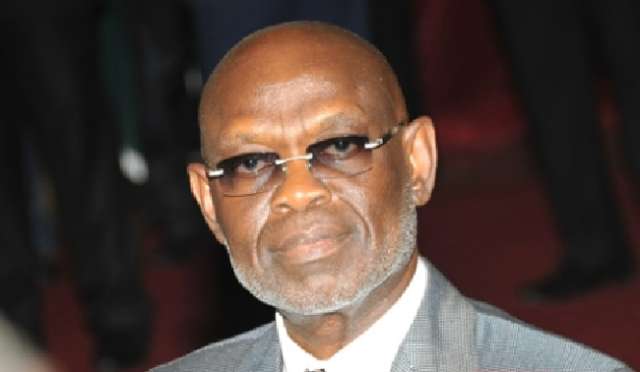 Tributes have been pouring in for a former Minister of Finance, Professor Kwesi Botchwey, who died at the Korle Bu Teaching Hospital last Saturday, aged 78.

Family members, politicians, academics and other members of the public have described him as the quintessential politician and statesman who served his country well.

Family members described him as a man with the purest of heart.

“Prof. Botchwey, affectionately called Doctor B by the family, was not only supportive financially but also devoted his time to family matters and was always ready to listen.

“He was very supportive of the family; and for him it was not all about money — he had time, he was approachable, always ready to give direction.


Many of us attribute our successes to him,” a member of the family told Graphic Online Sunday.

In separate interviews with Graphic Online, the National Chairman and the General Secretary of the National Democratic Congress (NDC), Samuel Ofosu Ampofo and Johnson Asiedu Nketia, respectively, said Prof. Botchwey’s demise was a great loss to the NDC and the nation.

The two principal officers of the party said it was the work of Prof. Botchwey’s committee that made the NDC bounce back strongly in the 2020 elections.

Before his demise, Prof. Botchwey was a member of the Council of Elders of the NDC.

Mr Ofosu Ampofo described the Prof. Botchwey as a “utility person” who had deep knowledge in finance and economic planning and placed his expertise and experience at the disposal of his party and the country.

He said Prof. Botchwey’s contribution as a member of the NDC’s Council of Elders was so phenomenal.

“Indeed, despite his age, he accepted to chair the committee that went round the whole country to solicit the views of party members as to what went wrong in the 2016 elections.

“It is sad that as we are all working so hard to win the 2024 general election, he passed on suddenly.

"We will miss the numerous pieces of advice and suggestions which he offered the party,” Mr Ofosu Ampofo said.

He said Prof. Botchwey was an affable person, easy to reach and always ready to help, adding: “I remember some of the advice and suggestions he offered.”

Mr Asiedu Nketia said Prof. Botchwey fought for internal democracy in the party and stood by the principles and ideals he believed in.

He said as Finance Minister, Prof. Botchwey resigned when the Valued Added Tax (VAT) he introduced was withdrawn by the government.

A leading member of the New Patriotic Party (NPP), Gabby Asare Otchere-Darko, took to Twitter to eulogise Prof. Botchwey “Former Finance Minister Kwesi Botchwey is dead. His leadership and commitment to the structural changes to our economy in the late 1980s were critical and the impact is still with us today. May he rest in perpetual peace,” he wrote.

“Yet he occupied pride of place in my heart as a politician. I got to know him very early in my life as a little boy through the power of television. In those days, during the Jerry Rawlings PNDC era, I recall that two people usually had the privilege of addressing the whole nation, not necessarily by law but by default, on TV annually.

“These two were Jerry Rawlings himself and Prof. Botchwey. Rawlings, as head of state, always attended the anniversary of the 31st December Revolution, where he stood at attention in his military fatigues and took the national salute from all the various groups taking part in the march pass,” he said.

“Your passing, at this time of an economic crisis, increases my nostalgia for your record term as Finance Minister.

"We will forever remember you as the minister who changed our economic fortunes. Rest in peace, Uncle Kwesi.”

A well-respected economist and governance expert, Prof. Botchwey served as Secretary of Finance during the military era of the Provisional National Defence Council (PNDC) (1982 to 1992) and as Minister of Finance and Economic Planning under the NDC (January 7, 1993 to 1995).

He is known as the country's longest-serving Finance Minister.

Other notable previous assignments were advisor to the World Bank on the1997 World Development Report.

He was, among others, a member and Chairman of the IMF‘s Group of Independent Experts who conducted the first-ever external evaluation of the Enhanced Structural Adjustment Facility, an advisor to the UNDP’s UN Special Initiative on Africa and an advisor to the European Centre for Development Policy Management (ECDPM).