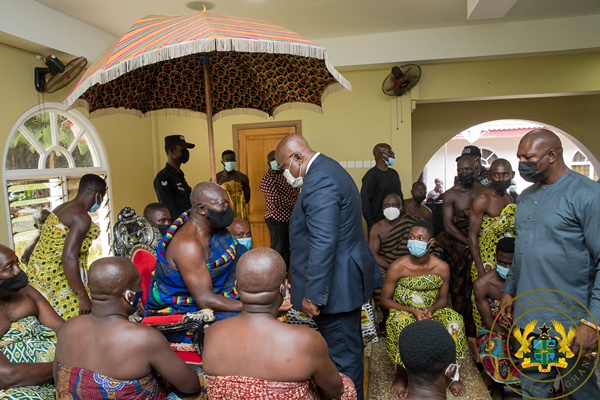 President Nana Addo Dankwa Akufo-Addo has expressed deep appreciation to the people of the Ashanti region for their unparalleled role in electing him for a second term.

Speaking in Twi on the first leg of a four-day tour of the region, the president said: 'But for your votes and support, I don't think I would have won the election'.

The region gave the president his highest votes at the last election with more than 1.7 million ballots.

He said he has always known the region to be the New Patriotic Party's (NPP) surest bet 'but the last election was impressive'.

President Nana Addo Dankwa Akufo-Addo said he had come to the region to ensure that the projects he promised the people were executed.

'Thank you Asanteman, thank you Otumfuo for all the supports and votes,' he said.

On his part, Otumfuo said despite the challenge globally, 'Work hard, kill yourself to prove to the people that the promises you gave during the election campaign were not lies'.

The Asantehene said he believed in the President to deliver because, at his age, he did not need material wealth.

Also speaking in Twi, the Asantehene said despite criticism, the president should remain focused and live up to the billing.

He commended the president for not remaining on his seat in Accra but touring the regions occasionally to assess work for himself.