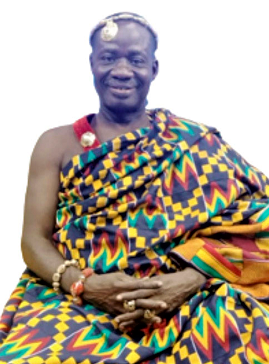 The Chief of Ochiso-Ajumako in the Central Region, Nana Kojo Dum IV, has called on the citizenry to support the government to turn the fortunes of the country around.

He explained that they could do so by contributing to the development of their respective communities by initiating self-help projects.
Nana Kojo Dum made the call at a durbar to climax activities marking his 10th anniversary of his enstoolment as the chief of Ochiso-Ajumako.

Addressing the durbar, Nana Kojo Dum, also urged the citizenry to live disciplined lives in order to effectively contribute their quota towards the nation’s development.

He said without discipline, one could not succeed in the quest for higher academic laurels, success in business, profession, marriage and indeed every sphere of life and, therefore, appealed to all and sundry to embrace his call.

He stated that once there was discipline, people entrusted with resources would ensure their judicious distribution for the benefit of all without recourse to personal benefits or affinity.

Talking about unity, Nana Kojo Dum said when he was enstooled as the chief of the town about 10 years ago, he prayed to God to help him unite his people to ensure development and was glad that he had succeeded in that direction.

A fundraising to support a GH¢20,000.00-Nana Kojo Dum Educational Support Fund was launched to offer additional support to Junior High School students who would gain admission to Senior Hight School.

As part of activities to mark the anniversary, the youth were sensitise to build their capacity.

Parents were also engaged on the importance of protecting their children, especially the girl-child, to minimise teenage pregnancy.

In addition, communal labour was organised to keep the environment clean.

Nana Kojo Dum known in private life as Richmond Okoaben-Mensah, is the Ablekuma North Municipal Director of the National Commission on Civic Education in the Greater Accra Region. — GNA