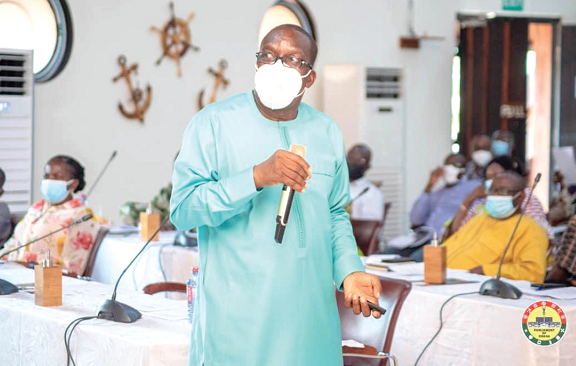 • Mr Bagbin speaking at the opening session of the orientation
30.5k Shares

The Speaker of Parliament, Mr Alban Sumana Kingsford Bagbin, has urged Members of Parliament to eschew partisanship in the course of work in the House.

He said the tolerance of Ghanaians for unbridled and unashamed partisanship in Parliament has reached a breaking point.

Addressing the opening session of a three-day workshop for new MPs in Ada last Saturday, Mr Bagbin said it was necessary for members to put the nation first before their political parties when it came to matters in the House.

“We are all aware that the tolerance of Ghanaians for unbridled and unashamed partisanship has reached a breaking point and the earlier we respond appropriately to that issue, the better for parliamentary democracy. What Ghanaians and all Africans are interested in is the democratic dividends and not partisanship,” he stated.

Mr Bagbin also urged the members not to allow the uniqueness of the 8th Parliament to be lost on them.

“It is the expectation of Ghanaians that we do more than before. We need to build bridges and collaborate more on many national issues than before,” he noted.

Mr Bagbin also assured members of his commitment to upgrade the Parliamentary Training Institute into a centre of excellence for the training of members and staff of Parliament, not only in Ghana but in Africa and other parts of the world.

He said the institute which was formally inaugurated in 2016 was operating on the 12th floor of Job 600, but with a much bigger space now.

“The institute is leading the organisation of this orientation and will continue to organise workshops for members and staff,” he stated.

The Majority Leader in Parliament, Mr Osei Kyei-Mensah-Bonsu, took the members through the functions of a legislator.

He said when they entered Parliament, most of them had their own perception about what the duties, obligations, and mandate of parliamentarians were.

“The first is representation of our constituents, deliberation on matters that come to us, and transmission of relevant information to the public. We also have an oversight responsibility,” he stated.

The Minority Leader, Mr Haruna Iddrisu, for his part, reminded the new members that they were now leaders and as such must lead properly.

“We are now leaders of the country and we must lead properly. COVID-19 imposes a new obligation on all of us. There must be some public sector reforms and how we even conduct business in the chamber must respond to the COVID-19 situation.

Mr Iddrisu also assured the Speaker and Ghanaians of the minority’s cooperation in the 8th Parliament.