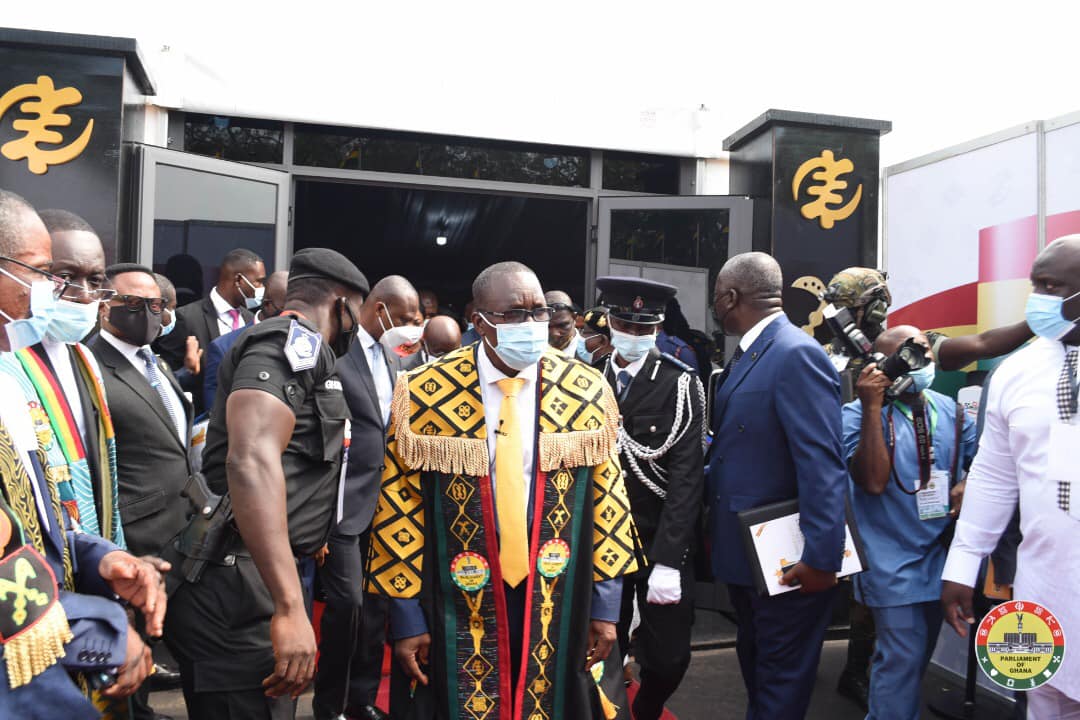 The Speaker of Parliament, Mr Alban S.K. Bagbin has ruled that the collaboration and association between the New Patriotic Party (NPP) and the Independent Member of Parliament (MP) for Fomena makes them the majority group in the 8th Parliament.

That came after Mr Bagbin had read the official letter from the Fomena Independent MP, Andrew Asiamah Amoako declaring to do business, associate and collaborate with the NPP side in the 8th Parliament.

"Honourable members, with this official declaration to the House, the House will accord him [Asiamah Amoako] the space to do as he has stated."

"Whatever he said outside was of no effect, so far as the business of the House is concerned, and therefore he had to do it officially for it to be read and captured in the Hansard."

"And so what we have now, you have the New Patriotic Party wing or caucus in Parliament together with the Independent Member of Parliament from Fomena, and they now constitute the majority group," Mr Bagbin announced to a thunderous uproar and singing by the NPP members.

Voice from the NDC side: "You are just a majority group, not caucus, premature ejaculation."

Speaker: "Honourable members, shouts of this nature will not be tolerated. When you are in this House, you are speaking to the Speaker, you are addressing the Speaker, when you want to speak to your colleague Member of Parliament, you whisper so that others not close to you don't hear what you are saying. You are permitted to signal each other and move to the corridors of the House to have your private conversations. But on the floor of the House, it is not permitted to shout, particularly when you use un-Parliamentary words. Please I will not repeat what I stated this morning, but let us conduct ourselves with decency, decorum and dignity.

"You are not called Honourable for nothing. I will by all means give you all the latitude to debate, that I will not constrain, but I will not permit the use of words which are unbecoming to the dignity of this House...Please discontinue that."

The Speaker of Parliament's ruling came during Friday's sitting of the House [Jan 15, 2021]. It was the second time the House was meeting after its inauguration on January 7, 2021.

Some members from the NPP side arrived as early as 4am to take their seats on the right side of the Speaker which by convention in the House is reserved for the majority side.

During the inauguration on Jan 7, 2021, the National Democratic Congress (NDC) members arrived early in the chamber and occupied the seats on the right side of the Speaker with the explanation that, both sides - NPP and NDC - had 137 seats each with one independent member in the 275-member House, hence no side could claim majority before the House was inaugurated.

Mr Amoako’s official declaration therefore gave the NPP side the numerical strength for purposes of doing business in the House as the Majority in line with Standing Order 7 of Parliament.

The rule in the House is that the Majority group sits on the right side of the Speaker.

The video below shows Friday's proceedings in Parliament

Writer;s email: This email address is being protected from spambots. You need JavaScript enabled to view it.