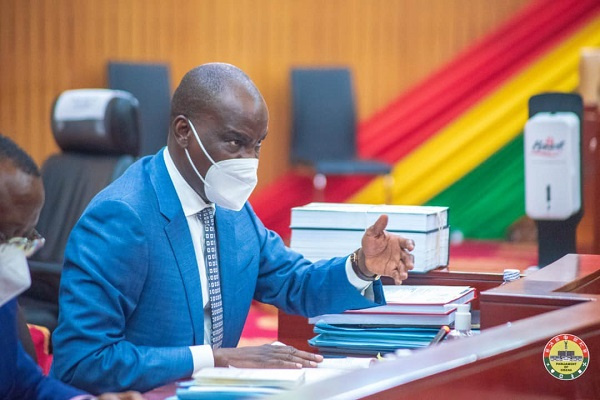 The Minority in Parliament has said the practice by the government to often resort to awarding road projects under sole source procurement method is astronomically inflating the cost of road construction in the country.

The development, it said, was part of the reason why the government was not able to have enough resources to undertake more road construction projects.

“Per what the Minister of Food and Agriculture, Dr Owusu Afriyie Akoto, said in Parliament yesterday, 4,465 kilometres of cocoa road projects awarded under the current administration cost almost GH¢14 billion but under the previous government 2,900 km of similar road projects cost GH¢5.1 billion,” it stated.

Addressing the press in Parliament yesterday, the Ranking Member on Roads and Transport Committee of Parliament, Mr Governs Kwame Agbodza, said: “The question Ghanaians should be asking is why did projects cost in this country go up so astronomically under the New Patriotic Party?”.

He stated that in reaction to a statement Dr Akoto presented on the floor of Parliament yesterday in reaction to an enquiry about how many cocoa road contracts had been awarded since 2017, which method of procurement was used in selecting the contractors and how the ministry intended to pay for those projects.

In response, Dr Akoto said the government had since 2019 earmarked a total of 286 cocoa roads contracts for construction at a cost of GH¢13.6 billion.

He said the roads, with a total length of 4,465 kilometres, were made up of 258 feeder roads and 28 trunk/highways roads and the duration for construction spanned between 12 months and 48 months.

Among the various procurement methods that were used in the award of such contracts, he said single source procurement was used to award a total of 177 road projects.

The Ranking Member, in his response to the statement by the minister outside Parliament, said prior to assumption of office by the current government in 2017, President Nana Addo Dankwa Akufo-Addo assured Ghanaians that he would work to ensure that sole sourcing procurement process in project contracts would become an exception and not a norm.

Contrary to such pledge, he said the government, through the Ministry of Procurement, had often resorted to the use of single source procurement in road projects.

“Part of the reason why the government is unable to build more roads is because the use of sole sourcing in the award of road projects inflates the cost of such contracts and the minister told an untruth whether those projects were awarded in dollars or not.

“This is a government that you can never trust. They tell you to look up but you should be looking down,” he said.

The Member of Parliament for Adaklu also accused the government of contributing to the high cost of road projects in the country due to delayed payments to road contractors.

“Sometimes, when the government pays contractors for work executed, 40 per cent of the money that is paid is on interest on delayed payment; so, it is not of value to the contractor and it does not ensure value-for-money.

“Every day, they say they are paying contractors but go round the country and you will see contractors in real trouble because they have not been paid,” he said.

Accusing the government of not caring about road projects in the country, Mr Agbodza said currently there was only GH¢1 billion in the budget to cater for capital investment in roads.

He, therefore, questioned how the government could raise resources to implement various road projects.