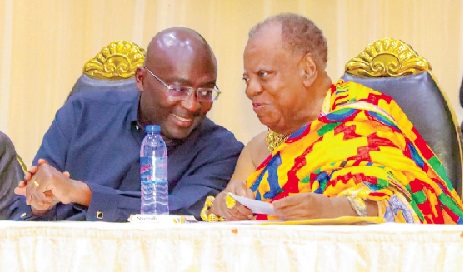 The Vice-President, Dr Mahamudu Bawumia, has described a new book written by the Omanhene of Asante Asokore, Nana Dr Susubribi Krobea Asante, as a gift to the nation.

He said a great man such as Nana Asante ought to be studied as a role model.

Dr Bawumia said this at the launch of the book titled “African village to the global village and back,” in Accra last Tuesday.

Edited by journalist and lecturer, Kofi Akpabli, and titled “Critical and biographical essays of Nana Dr SKB Asante; from an African village to the global village and back,” the more than 750- page book chronicles his public and professional life as a legal luminary, a diplomat, a historian and revered traditional leader in the country.

It captures the life of the writer, details his prime into becoming a lawyer and his contribution to legal education in the country.

The Vice-President described Nana Asante as an asset and one of the finest brains produced by the country.

He said as a quintessential scholar, an academic and international lawyer with a distinguished career, his was an improbable journey from an “African village to the global village and back.”

Dr Bawumia said by writing a book at age 90, all must read to grasp all the experiences and wisdom.

Launching the book, the Chief Justice, Justice Kwasi Anin Yeboah, traced the rich background of the author in various sectors both home and abroad and said he exemplified an unquestionable political neutrality and an untainted loyalty to the state.

He said Nana Dr Asante offered a fountain of lessons from which rulers and the ruled should all pick, pointing out that people should not be entrusted with certain technical positions or sensitive national assignments which were beyond the confines of their intellectual or professional capacity no matter how well connected they might be politically.

In the area of democracy and governance, the Chief Justice added that the author occupied a special place in history as chairman of the committee of experts which produced the 1992 Constitution.

“No Constitution is whiter than white and no democracy is purer than pure. It is also true that the 1992 Constitution with all its defects, is the longest-serving Constitution of Ghana, while the fundamental underpinnings of our democracy remain intact in spite of all the strains and stresses,” he indicated.

Justice Anin Yeboah added that all that was a colossal testament of the professional solidity and immeasurable contribution of Nana Dr Asante to the country’s constitutional governance and sustainable development.

The Chief Justice said it was highly remarkable that from the life of obscurity in the village, Nana Dr Asante rose to national eminence and global prominence.

Reviewing the book, the Dean of the University of Professional Studies Accra (UPSA) Law School, Professor Ernest Kofi Abotsi, said the book introduced the reader to the author’s wide diversity of knowledge and fertility of thoughts.

“From property law through international law to transnational corporation and investment law, Nana chronicles a rich journey of a scholarship, juristic thoughts and concrete contribution to the worldly experience and touch,” he said.

He said the author’s contributions to legal education in Ghana were also adequately stated in the book and the fact that he was one of the five founding lecturers at the Faculty of Law of the University of Ghana.

Prof. Abotsi, therefore, urged all to read the book and, among other subjects, form the impressions of his strong perspectives on customary law and the writing of the 1992 Constitution.

“In content, this book provides an enchanting read and compelling material for everyone with the slightest interest in law, international diplomacy, chieftaincy, politics and governance as well as public policy,” he added.

The book’s fluid style, the UPSA Law faculty dean said, made easy reading while the structure of the material was coherent and should endear itself to any reader with the penchant to probe.

A Representative of the Asantehene, Nana Fobi Kropa III, also described the author as a great leader who lived a humble life.

He called for more research into the chieftaincy institution, which he said, was one of the most under-researched important institutions.

For his part, Nana Dr Asante expressed appreciation to all who played a role in his life, and particularly, paid tribute to his grandmother and mother for teaching him the simple virtues of life and assisting him to go to school.

He also acknowledged the immense support he had from his wife, Philomena, throughout his marriage life and also the headmaster of his elementary school.
President Nana Addo Dankwa Akufo-Addo bought the first copy of the book for GH¢50,000 while the Vice-President, Dr Mahamudu Bawumia, bought one at GH¢20,000.