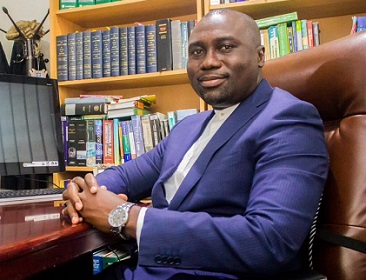 The Director of Legal Affairs of the New Patriotic Party (NPP),Gary Nimako Marfo, has urged members of the party to resort to the internal mechanisms of the party in settling disputes instead of always running to the law courts.

According to Mr Marfo,the NPP Constitution had extensive dispute resolutions mechanisms to resolve all conflicts and,therefore,it was important for members of the party to obey such rules to the letter to further enhance unity and cohesion in the party.

“The provisions in the NPP Constitution are extensive and provide the broad framework for the resolution of all types of conflicts that may arise in the day-to-day operations of the party,” he said

Mr Marfo,who is a private legal practitioner with considerable experience in litigation and alternative dispute resolution (ADR),was speaking during a training programme for NPP Members of Parliament (MPs) and Regional Executives from the Bono,Ahafo and Bono East Regions in Sunyani last Saturday.

The training,organised by the NPP, was on the theme: “Developing Members of Parliament and Regional Executives for Effective Performance.”


Participants were trained in the ideology,values and history of the NPP, election conflict management, fundamentals of political economy, leadership and team building,problem identification and managing party stakeholder relations.

Mr Marfo,who trained the participants in election conflict management,said the party had made appropriate and extensive rules to regulate all activities,including intra-elections,but unfortunately some party members refused to abide by tenets of the rules,which sometimes led to conflicts.

“The best way to avoid conflicts, especially election disputes is to simply apply and adhere to the rules,” he said.

However,he said there were instances where conflicts had arisen even when the rules were obeyed and that was why the party had put in place extensive mechanisms to deal with such conflicts.

He said Article 4 of the NPP’s constitution titled: “Disciplinary and Grievance Procedure” set out the rules for resolving all sorts of conflicts.

He added that it was based on the said constitutional provision that the party had established disciplinary committees and other grievance related committees to deal with conflicts at the constituency, regional and national level.

Also,he said the party established the ADR and Legal Support Committees this year to help deal with the disputes that arose during the internal elections organised by the party.

“This shows that the party is committed to resolve all disputes and has also put its house in order to deal with any potential dispute.Let us use the internal mechanisms to further foster unity in this great party,” he said.

Mr Marfo said the creation of the Legal Directorate was a further testament that the NPP was serious about dealing with any potential conflicts to help position the party for victory in 2024.

“The Legal Directorate has the mandate to prevent intra-party legal disputes,engage in dispute resolution and legal representation and also perform election related responsibilities,” he said.
Writer’s email: This email address is being protected from spambots. You need JavaScript enabled to view it.