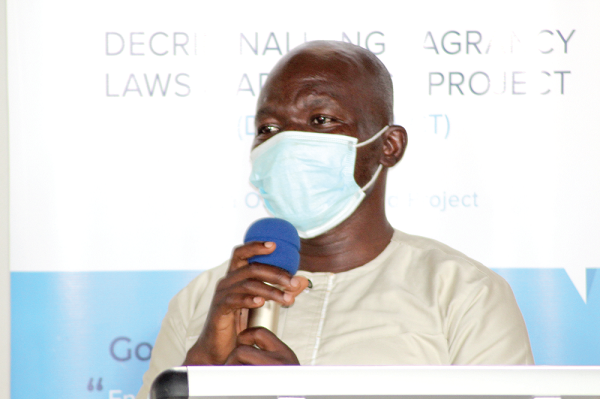 The Presiding Member of the Weija Gbawe Municipal Assembly, Mr Oduro Ampaw, has encouraged residents in the municipality to always seek clarity on its bye-laws that do not sit well with them.

“As residents of this municipality, you have the right to always ask for explanation on any bye-law because it is made to regulate your activities. You must, therefore, understand existing bye-laws to prevent you from violating them,” he said.

He made the call at a workshop organised by the Crime Check Foundation (CCF) in partnership with Open Society Initiative for West Africa (OSIWA) in the Weija Gbawe Municipal Assembly to create public awareness of bye-laws in order to reduce violations.

They were taken through the various bye-laws of the assembly, including the Food Safety and Hygiene Bye-laws, 2017, and the Environmental bye-law.

The workshop was also aimed at decriminalising bye-laws that fight against poverty.

It was part of a project dubbed “Decriminalising vagrancy Laws and Advocacy,” which the CCF is pursuing with funding from the Open Society Initiative for West Africa (OSIWA).

The project seeks to create an enabling environment for vagrants to know, claim and exercise their rights and responsibilities in the country.

The participants took turns to ask questions on how staff of the assembly should enforce some of the bye-laws.

The Municipal Coordinating Director, Ms Mercy Quansah, asked the public to be well informed of the bye-laws of the municipal assemblies to avoid finding themselves at the wrong side of the law.

She said that would also ensure that petty offences were prevented in the communities.

“Our prisons are already full, so we do not want any more offenders and that is why it, important for you to be educated on the bye-laws,” she said.

A Representative of the CCF, Dr George Asekere, explained that the objective of the project was to increase public awareness of vagrancy laws and their effects on vagrants in the country.