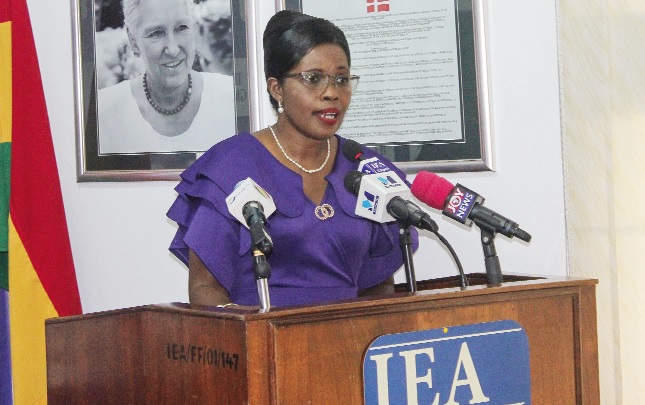 The 1992 Constitution should be reviewed to grant quotas to women to considerably increase their political representation in the legislature and in all decision-making bodies, a former Head of the Department of Political Science, University of Ghana, Dr Maame Adwoa A. Gyekye-Jandoh, has advocated.

That, according to her, would ensure that symbolically and substantively, Ghanaian women, who constituted more than 51 per cent of the population, enjoyed their rights of participation as citizens and contributed effectively to development and democratic processes.

Dr Gyekye-Jandoh made the call when she took her turn at the Institute of Economic Affairs’ (IEA) Constitutional Review Seminar last Tuesday.

The seminar, in collaboration with the Prof. Mike Oquaye Centre for Constitutional Studies in Accra, forms part of IEA’s Project on Reviewing Ghana’s 1992 Constitution as part of its efforts to promote good governance and sustainable development in the country.

It is therefore undertaking research and advocacy on provisions of the Constitution that in its view require reform.

The institute has therefore commissioned some experts to develop and present papers or make presentations on a number of thematic areas outlined in an issues paper presented by Prof. Oquaye earlier this year at the launch of the Oquaye Centre for Constitutional Studies at the IEA.

The issues paper highlights areas of Ghana’s 1992 Constitution which require reform and called for a project, not to rewrite the whole constitution but to study and recommend areas where appropriate amendments, additions and subtractions may be made to strengthen the process towards democratisation, good governance, the rule of law, equity, justice and development in the Republic.

In her presentation on “Gender and the Constitution,” Dr Gyekye-Jandoh said: “Women are Ghana’s ‘hidden assets’. Excluding women from positions of power and from elected bodies impoverishes the development of democratic principles in public life and inhibits the economic development of a society. We must reduce substantially factors that hinder women’s success to ensure that they reach their full potential”.

She said with Ghana’s commendable record as the first African country south of the Sahara to gain independence from colonial rule, and also the first African country to mandate reserved seats for women in 1960, an affirmative action undertaken by President Kwame Nkrumah to ensure that at least 10 women participated in the decision-making processes of the first Parliament of the first Republic, it is appropriate for the country to amend its constitution to include constitutional quotas for women.

Citing Rwanda as an example, she said, the country had bold constitutional provisions and legislative measures that introduced quotas and non-quota measures to ensure gender equality, saying Article 80 of the Rwandan Constitution was categorical in providing that at least 30 per cent of elected and appointed Senators must be women; and women are to occupy at least 30 per cent of positions in decision-making organs.

“In other words, 30 per cent of the total number of parliamentary seats must be reserved for women, who must themselves be elected,” she stressed.

Dr Gyekye-Jandoh said while reserved seats were by their nature enforceable, candidate quotas were often not. Hence, the call for 30 per cent reserved seats for women. That, she said, would ensure that a critical mass or ‘critical minority’ of women begin to make a difference for women’s interests, needs and priorities, as demanded in various international treaties and conventions.

She, however, cautioned that it was noteworthy though that gender quotas alone did not remove all barriers for women in politics as “one cannot deal with the problem of female representation by a quota system alone” and called on political parties, the educational system, non-governmental organisations, trade unions and churches, among others to take responsibility within their own organisations to systematically promote women's participation from the bottom up.
S

he further cautioned that it was not enough to make rules that created a gender quota; but that systems must be put in place to ensure the quota was actually implemented. She therefore called for the creation of a separate independent implementing entity or agency such as a Gender Equality Ministry or Commission to plan, monitor and implement all the policies and activities related to the provisions of the Affirmative Action Bill when passed, and to ensure compliance in achieving the quotas mandated by the Constitution in practice and further called for rules to sanction non-compliance.

She further called for the full participation of women in any new constitutional review and reform processes to ensure the interests of women were properly catered for, saying “men cannot purport to know how to address the issues confronting women better than women”.