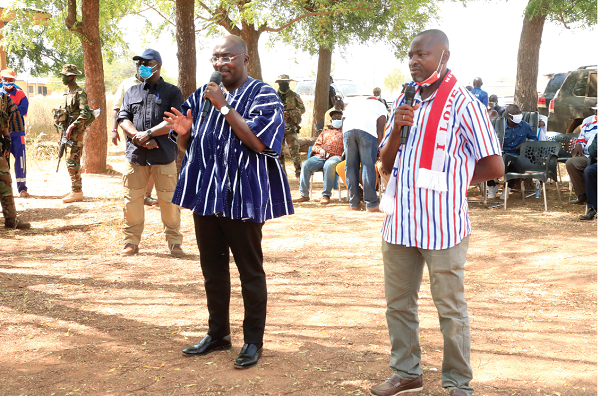 The Vice-President, Dr Mahamudu Bawumia, has said the future of the country looks brighter under the New Patriotic Party (NPP) government, for which reason he has urged the electorate to renew the party’s mandate in the December elections.

"The future looks brighter under Nana Akufo-Addo’s administration because we have done in the past four years what the National Democratic Congress (NDC) could not do in eight years,” he said.

Dr Bawumia added that with the kind of development being witnessed across all sectors in the country, the renewal of the NPP’s mandate would enable the government to embark on more projects for growth.

"So when you go to the polls to cast your votes, remember the good works we have done in the past four years and vote massively for the NPP for more development.

“Bringing back the NDC and John Mahama to power means bringing back suffering and ‘wahala’ to Ghanaians," he said.

He was addressing separate rallies in the Chereponi and the Yunyoo/Nansuan districts in the North East Region as part of his five-day tour of the region.

Dr Bawumia said the NDC did not prove itself worthy in the management of the country when it was given the mandate and so it should not be trusted with its phantom promises, which he said were only aimed at winning votes.

“If you vote for the NDC, it means programmes such as the free senior high school (SHS) and Planting for Food and Jobs are likely to be cancelled," he said.

He also said the Chereponi and the Yunyoo districts, which are now in the North East Region, would receive their fair share of the national cake when the people renewed the mandate of the government.

The Vice-President further said the government was initiating a new educational policy that would enable SHS graduates who could not further their education due to financial constraints to access loans which they would pay back after their respective courses.

The Chief of Cheri in the Chereponi District, Baye Yaw, expressed appreciation to the government for the fact that the area had not been left out in the sharing of development projects.

"It is crystal clear that governance is being felt at the local level under the leadership of President Akufo-Addo. We say a big thank you to the President and the government for creating the North East Region to accelerate development in the area, as well as build a prosperous Ghana for all, in spite of the numerous challenges in the country," he added.